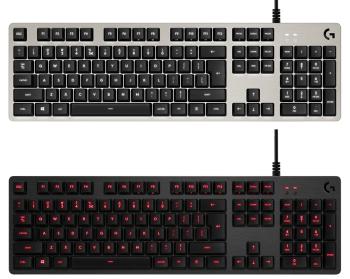 Sometimes Logitech equips the popular Cherry MX mechanical keyswitches but in the case of the Logitech G413 Mechanical Gaming Keyboard it has stuck to its guns, employing the in-house Romer-G mechanical switches. These might be less well known among PC enthusiasts but Logitech claims they offer 25 percent faster actuation than 'standard' mechanical keys, a short-throw actuation point of 1.5 mm, greater durability, and are designed for clean and precise backlight illumination.

Logitech has specified a "5052 aluminium-magnesium alloy top case" for the G413. It says that this "serves as the keyboard's backbone." However, it is traditional to create keyboard rigidity via a metal backplate, and Logitech doesn't mention this aspect of the keyboard's construction.

Other attractive features of the Logitech G413 Mechanical Gaming Keyboard design include a USB 2 passthrough port which can be used for your mouse, for example. For PC connection the keyboard has a captive 6ft cable. In Logitech's minimal design the function keys double up for media controls (a function key toggle is used to facilitate this). Logitech neatly illuminates the dual functions with symbol cutouts on the front face of the keycaps. 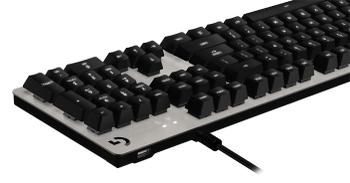 As a gaming keyboard the G413 offers a Windows key deadening 'Game Mode', plus 26-Key Rollover, and Anti-Ghosting. Last but not least you can use Logitech Gaming Software (LGS) for tuning your lighting preferences and creating custom functions and macro commands to be triggered by the F-Key row.

In an email to HEXUS, Logitech said that the G413 Carbon / Silver is available worldwide this month with a suggested retail price of £99 / $89.

1 Intel and Tile team up to prevent laptop loss woes

Tile expects to grow its installed tracker base to 30 billion devices in the next five years.

7 HyperX teams up with Ducky for compact mechanical keyboard

nacasatu
I think they prob just got the dollar and pound prices wrong way around.

Nope, listed on the UK Logitech site at £99 too:
http://gaming.logitech.com/en-gb/gaming-keyboards

I'm looking for a ‘tenkeyless’ keyboard and considering this instead at nearly half the price:
https://www.scan.co.uk/products/thermaltake-ttesports-poseidon-zx-mechanical-gaming-keyboard-brown-switches-back-lit-keys-n-key-roll

Edit - though after reading several reviews on multiple sites complaining about ‘double’ keys / ghosting after a few months, I think I'll pass on that too :(