Tobii has launched its second generation gaming eye tracking hardware for PC. The Tobii Eye Tracker 4C adds head-tracking to its abilities yet only needs a single USB2 connection. This new product will directly replace the Tobii EyeX gaming peripheral and can be utilised in over 40 games titles at the time of writing. 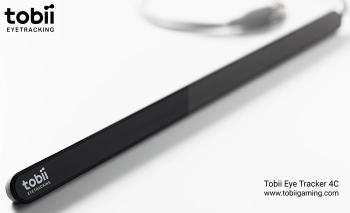 According to Tobii, its eye tracking products complement rather than replace traditional PC gaming peripherals but provide gamers with a significantly richer, more immersive experience. The eye tracking helps mimic actions that occur in real life so works naturally with your gaming instincts. The new generation Tobii Eye Tracker 4C delivers more than the EyeX peripheral in five key areas, as follows:

The above improvements were made based upon user feedback. Remember that as well as its gaming functionality Tobii eye tracker peripherals can be used for Windows Hello facial recognition.

As mentioned in the intro, there are currently around 40 games titles that support eye tracking enhancements. This games roster includes AAA titles like Deus Ex: Mankind Divided, Tom Clancy’s The Division, and the soon to be released Watch Dogs 2. New titles are added monthly with Tobii expecting there to be about 100 eye tracking friendly games available by the end of next year.

The new Tobii Eye Tracker 4C is available and exclusive from Scan Computers.

1 Intel and Tile team up to prevent laptop loss woes

Tile expects to grow its installed tracker base to 30 billion devices in the next five years.

7 HyperX teams up with Ducky for compact mechanical keyboard

Do they mean Elite is in Beta, or the tracking is?
Posted by fred701 - Thu 10 Nov 2016 20:47
Tobii have been pushing the eye tracking products heavily for months now but the reviews from real users has been mixed. Eye tracking alone is a great assistive technology but I don't think it's a good fit for gaming. I guess that's why they have added (beta) head tracking. Will be interesting what Hexus make of it.
The new head tracking feature sounds like the kind of free head tracking you can get with a webcam and free software like freetracknoir. Standalone head tracking solutions like EDTracker (Pro or DIT version) or LED/Webcam tracking like TrackIR are in my opinion far better solutions.
Posted by freshcheddar - Sun 13 Nov 2016 16:02

Do they mean Elite is in Beta, or the tracking is?

Head Tracking is in Beta, there is apparently a full patch for it on Nov 25th, which will take it out of Beta.
For me the Head Tracking will be more beneficial and I hope it is as good or better than the current offerings (Trackir etc)
Posted by freshcheddar - Sun 13 Nov 2016 16:19
The Scan pages links to the Tobii 4c “Review” on Hexus. Will there be a proper review now that the unit is available?
Posted by fred701 - Mon 14 Nov 2016 11:05

freshcheddar
Head Tracking is in Beta, there is apparently a full patch for it on Nov 25th, which will take it out of Beta.
For me the Head Tracking will be more beneficial and I hope it is as good or better than the current offerings (Trackir etc)

Hi, What do you see as the downsides of the TrackIR tracking ?
Copyright © 1998 - 2020, HEXUS.net. All rights reserved. HEXUS® is a registered trademark of HEXUS.