AMD has published a product page which talks up the attractions of its new AMD 4700S Desktop Kit. The power plant behind this desktop kit is a Zen 2 architecture octa-core AMD processor dubbed the 'AMD 4700S' – note that this isn't called a 'Ryzen' part. AMD refers to this kit as an "all-in-one soldered design". Interestingly, we saw a system based upon the same platform being advertised at major a Chinese retailer in April, so it is pretty certain the AMD 4700S desktop kit is based upon Xbox Series X components that didn't make the grade.

The AMD Cardinal system with AMD 4700S processor, which we reported on in April, came with 16GB GDDR6 on board, and was put together with a Radeon RX 550, and 500GB SHDD, in a dinky case to make a complete system costing about £500 in a direct conversion from Chinese Yuan. 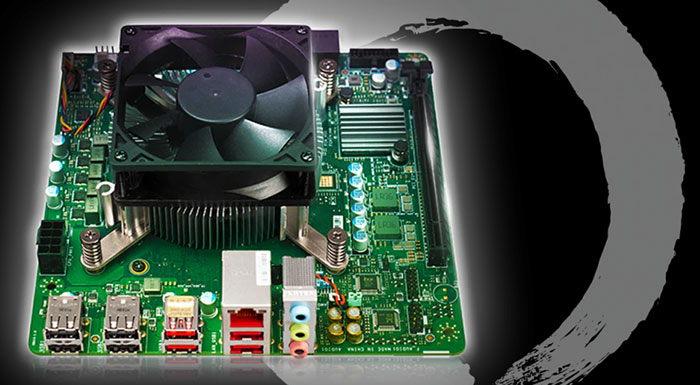 The new official AMD 4700S Desktop Kit sounds less of a bare-bones offering and more like an SBC product, with the official website listing a variety of AMD and Nvidia GPUs that are suitable / fit, and merely providing PCIe slot, recommended power supply, and storage interface specs. So you will have to get your own GPU, SATA storage (2 ports free), and PSU (300W+ recommended). This new kit doesn't even look like it comes in a case (and no OS of course)… 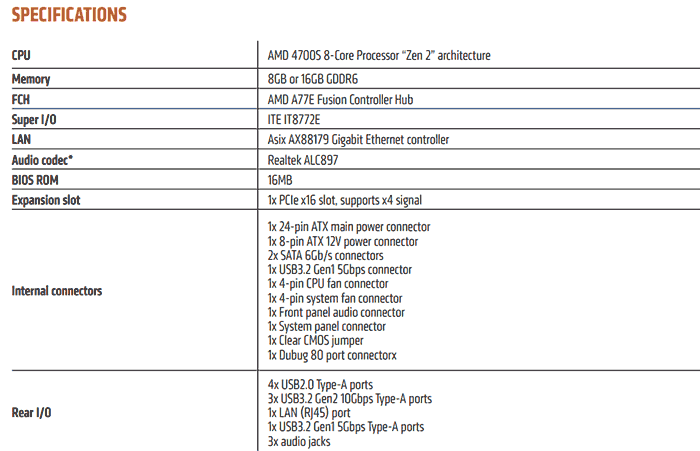 The above specs table and more can be found in the downloadable manual (PDF).

On the new product page AMD shows the AMD 4700S 8-Core Processor Desktop Kit as just 'bare board' with cooler attached. There are some board diagrams in the manual. With all the parts you will require to make this into a finished system it should come in much cheaper than the Chinese market targeted 'Cardinal'. Without pricing and availability it is hard to know if this is an attractive product. If you had an old quad-core system with 4 or 8GB of RAM (or worse) it might make a nice step up, and some could simply carry over their SSD, GPU, case and PSU.

CAT-THE-FIFTH
It uses 16GB of expensive GDDR6,and yet has no working GPU??

Indeed. Can't image that there are that many yield-wise where they whole GPU is broken but the CPU works, assuming that any defects on the GPU are based on the normal defects-per-area.

GDDR6 and CPUs? Well maybe some 7zip benchmark likes GDDR but most consumer loads probably won't.
Posted by Irien - Mon 28 Jun 2021 13:48
Looking at the spec, the reason there's no m.2/nvme is that the pcie 4x slot used for nvme is now redirected to the PCIE slot for GPU.

In a way, I'm surprised there are no spare PCI-E lanes from the cpu, but I suppose this harkens back to the Ryzen APUs which limit descrete GPU/PCIE to 8x. I guess the onboard GPU uses reserved PCIE lanes internally, perhaps? Just seems different to Intel's implementations of onboard GPU.