Shuttle today announced that it has started to ship the first batch of its Barebone DS81 systems. These systems are just 43mm tall and can be kitted out with a 4th Generation Intel Core Processor (LGA1150) of your choice from Celeron to Core i7 with a maximum TDP of 65W.

The Shuttle DS81 gained a "great deal of attention at CeBIT," according to Shuttle's head of marketing and PR. HEXUS did take a brief look at it back then. The system's key features beyond its ultra-compact size and support for Haswell processor is that it sports two DisplayPort connectors and an HDMI connector and is capable of 4K content playback. 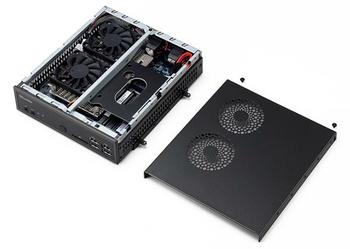 To complement your choice of processor you can equip up to 16 GB DDR3 memory. Inside the chassis is room for a 2.5-inch disc drive, connected via a SATA 6Gbit/s interface. Two Mini-PCI Express expansion slots are available for additional cards including extra storage capability via mSATA-SSD or a Wireless network card. Staying on the topic of storage, the machine is also equipped with a multi-format card slot on its front panel. 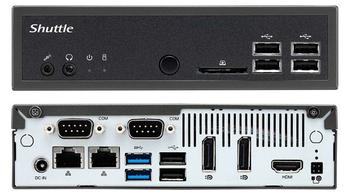 You can see by perusing the above specs that the DS81 is built for "special networking applications" with its 2x Gigabit Ethernet ports and also two serial RS-232 interfaces for device control (1x switchable to RS-422/RS-485). Complementing this purpose Shuttle has designed the DS81 with a both a remote power-on connector and an always-on jumper to turn it on as soon as power is (re)supplied. 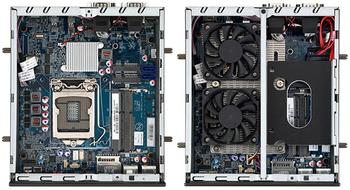 This barebones 190 x 165 x 43 mm system is built to be operated in either horizontal or vertical operation and is supplied with a VESA mount for monitor or wall installation. Depending upon where it is installed you might want to get hold of the optional WLN-S twin-antenna Wi-Fi module.

The Shuttle DS81 is now available for 179 Euros before any applicable VAT.

I was thinking it would make a great lights-out device for remote offices. Twin Serial for the router/firewall, 3G backup internally… and it's clearly designed for 24x7x365 operation… unlike most small nettop style boxes.
Posted by crossy - Fri 28 Mar 2014 08:40

Only because they couldn't get a good price on a parallel port! :p While I agree that perhaps more USB would be more useful in a home environment - or in my case a pair of eSATA's - if they're intending for some embedded commercial use then ye olde RS-232 makes sense.

bdaniel7
This and pfSense will make a great router.

Hmm, 2x60mm fans and being from Shuttle you can pretty much guarantee that they won't be “low noise” versions says “noisy” to me.

Maybe it's the bad influence of those case modders on Hexus but my first thought was: ooh, whip off those two naff 60mil fans, cut a hole in the case top and slap on a quiet 140mm with a finger guard. Way I figure it (wet finger in the air) those 60mm can't be pulling more than 40CFM, so my 140mm pulling 60CFM+ is going to give me better cooling and, at sub 20dB, quieter too.

I feel a project coming on - anyone got any recommendations for processor? ;)