Such ingredients make for a popular choice from a big-name brand that backs its products with a five-year warranty as standard, but what if you simply want to go big? Closed-loop options beyond 360mm tend to be limited, but it turns out you're in luck as Corsair has one more Elite Capellix cooler in its arsenal, the 420mm H170i launching today for a jaw-dropping £200.

The lofty fee shouldn't come as too much of a surprise - the existing H150i already fetches £180 and the only way to go is up - yet £200 does feel like a lot of money for an all-in-one cooler. Competitors at this premium end of the market tend to offer some form of integrated LCD display as an added incentive, and if it's merely size that you're after, the recently reviewed Arctic Liquid Freezer II touts 420mm credentials for a mere £110.

Value isn't the H170i's strong suit, but as Corsair's largest all-in-one it will naturally appeal to users wanting to incorporate a bigger radiator into their iCue-laden build. To that end, the Elite Capellix design continues where it left off with 33 vivid LEDs on the pump head, plus a further eight on each ML140 RGB fan. Colour transitions and effects do look particularly smooth, but it's a shame the four visible screw heads atop the CPU block - used to switch between black and transparent covers - haven't been concealed for this top-end model.

There are rivals with arguably more attractive CPU blocks - NZXT's circular LED designs are particularly swish - but few offer as comprehensive RGB synchronisation support as the Corsair. To that end, a SATA-powered iCue Commander Core lighting and fan-speed controller is included in the bundle to serve as a single hub for six four-pin PWM fans with dedicated RGB headers. Ample scope for the H170i to be configured in a push/pull configuration with a further three optional fans, and the Commander Core controller also takes care of motherboard USB connectivity - meaning no ungainly USB cable jutting out of the CPU block, as used to be the case.

In terms of performance, the giant 450mm x 140mm x 27mm radiator is the star attraction, but the other components retain familiarity with the rest of the Elite Capellix range. That means the same low-noise centrifugal pump promising a flow rate of 0.82L/min while generating less than 20dB of noise, a 65mm split-flow copper cold plate lined with 128 micro-skived fins per inch, and 140mm magnetic-levitation fans that provide 3.1mm/H2O of static pressure with speeds ranging from 400 to 2,000RPM. 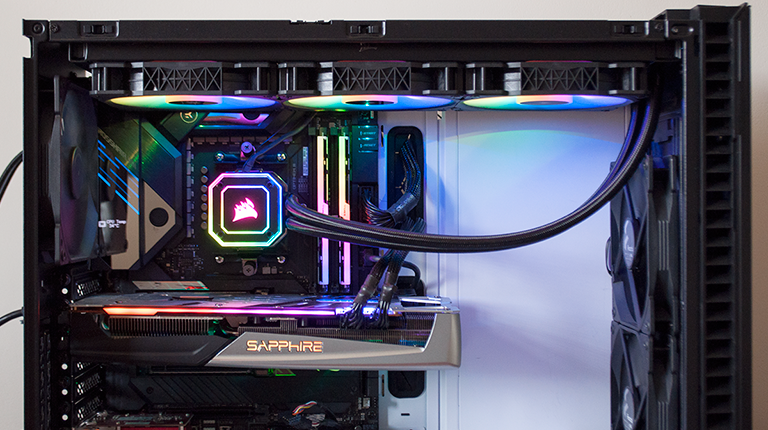 Stating the obvious, a radiator as large as this requires a good-sized chassis. Corsair views the H170i as a natural companion for its new full-tower 7000D chassis (review coming soon), but we've just about been able to squeeze the radiator into our purpose-built Fractal Design Define 7 test platform. Not without a few modifications, mind. The 5.25in front optical mount had to be removed, plus the dual 140mm intakes lowered, and even, then it's a very tight fit.

Still, it's nice to have a build with 140s throughout, mounting hardware for all the latest sockets from AMD and Intel is supplied - including Threadripper - and if you've used a Corsair AIO in the past, you'll know that the installation process is a breeze. On our Ryzen build it's merely a case of attaching the relevant arms to the CPU block and then securing it to the already-present AMD brackets with a pair of thumb screws. Simple stuff, though given the £200 price point, we're saddened to see that Corsair still doesn't include any spare thermal paste - all you get is what's pre-applied to the copper contact plate. 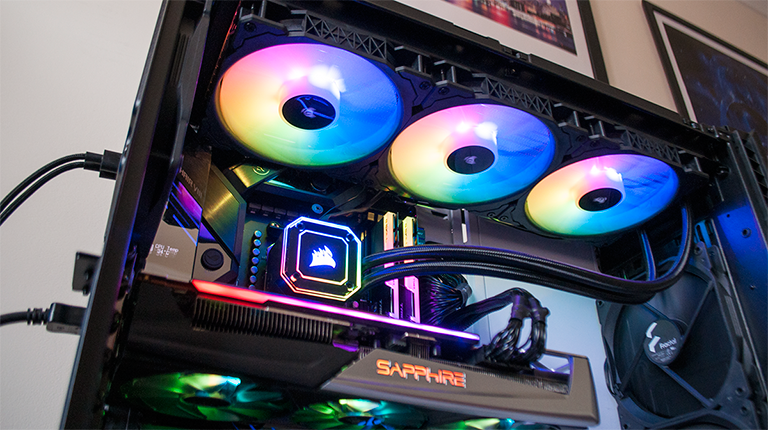 Looks rather neat when in situ, not only is the H170i a whole lot easier than a DIY loop, it also offers good scope for customisation through iCue. You'll find a plethora of lighting effects with synchronisation across other Corsair hardware, a choice of cooling presents including a Zero RPM mode that turns the fans off at low load, and emergency triggers that can be used to ramp-up fan speed, change LED colour or initiate a full shutdown when coolant temperature exceeds a user-defined limit.

Long story short, the H170i takes a tried-and-trusted all-in-one format and incorporates a larger 420mm radiator. Question is, how much of a performance uplift is there over, say, the 280mm H115i? Only one way to find out.