The rise of solid-state drives (SSDs) has been a definite boon for the PC industry. Now commonly available in capacities up to 4TB, most modern motherboards feature multiple M.2 NVMe slots that make old-school SATA all but redundant. Portable storage has got in on the act, too, and anyone after a pocketable drive with GB/s throughput now has serious choice.

Solutions from Seagate, SanDisk and WD all offer decent capacity and speed for plug-and-play USB drives, but Asus looks to take it up another notch with the Arion S500 SSD.

Asus has previously released this enclosure as a barebones solution to which you add your own PCIe NVMe M.2 SSD. Known simply as ROG Strix Arion, this £45 aluminium casing features subtle RGB lighting on the top and back, along with a 10Gbps internal bridge from NVMe to USB-C.

The very same enclosure is used for the SSD version. Asus duly adds a 500GB drive and prepackages it in a one-stop-shop solution. Priced at around £115, it's a shame there's no larger capacity - rivals offer 1TB at nearly the same outlay. 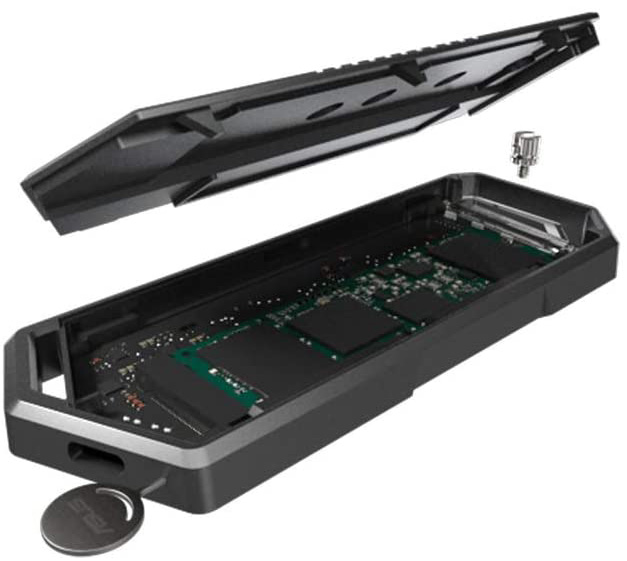 Though Asus does not recommend it, popping the aluminium hood requires the use of a mobile phone pin or something similar as the package, unlike the barebone version, does not include it.

Doing so reveals the innards. There are no surprises, with Asus opting to run with a 500GB drive based on the Phison PS5012 controller commonly used on Corsair Force and Patriot drives. Its basic specs are considered mainstream, coming in at 3,200MB/s sequential read and 1,000MB/s sequential write from the 3D TLC NAND, and such intrinsic speed is more than enough to saturate the 10Gbps bandwidth.

Given this is a ROG Strix product, with the emphasis on enthusiast, we believe Asus ought to have matched the latest SanDisk and WD drives by offering a 20Gbps USB 3.2 Gen 2x2 conduit instead.

Measuring 125mm long, 48mm wide and 11mm thick, the drive itself weighs 107g - only 9g of that is the weight of the SSD PCB - and is well put together. Asus provides a basic utility, through which key vital stats are displayed, alongside pre-loaded NTI Backup Now EZ software. Useful for some, the SSD provides 256-bit AES security, as well.

AuraSync software is used to configure the lighting, and it can be turned completely off if needs be. Understand that the set profile is stored on the host PC, so moving the Arion SSD to another results in the default wave pattern being active.

A 40cm Type-C-to-Type-C cable is bundled in the box. The barebones version also features a USB-C-to-A - this one doesn't - which is difficult to understand, especially as some prospective users may not have the newer Type-C USB on their machines.

Arion SSD's chassis is a decent heatsink into the bargain, though. Running a write stress test reveals temperature keeps to the right side of 65°C, helped by having a thick wodge of thermal tape between SSD and upper part of the casing.

Asus says part of NAND is purposed into SLC mode for greater performance when using hot data. No capacity limit is provided, and it is not configurable by the user, but we reckon it's over 30GB going by some write tests.