We've often wondered what it might take for AMD to get system builders on board when rival Intel is known to have dominated the market for quite some time. Turns out the answer is simple; build a compelling product and they will come. That is certainly the case for the firm's Ryzen CPUs, with every major integrator now eager to put forth an AMD alternative.

The latest to join the fray is Corsair, whose eminently likeable One compact gaming PC has belatedly been infused with many-core Ryzen tech. It's a development that reviewers and consumers alike have been clamouring for, and Corsair answers the call with a trio of new models launched under the One a100 umbrella.

Each configuration employs an Asus ROG Strix X570-I Gaming motherboard, a 2TB secondary hard disk and a Corsair SF600 Gold-certified power supply. Ryzen innards are new, but on the outside everything else stays the same. No bad thing as the petite 200mm x 176mm x 380mm rig is, in our estimation, one of the smallest and sexiest high-performance gaming PCs that money can buy. Heck, despite the Corsair One chassis having been around for a couple of years, you might argue it is better looking than certain upcoming games consoles.

Sleek aesthetics are bolstered by robust build quality - the 2mm-thick aluminium chassis lends the whole frame a solid and weighty feel - and the front of the unit continues to proffer a combination audio jack, two USB 3.2 Gen 1 Type-A and HDMI 2.0, ostensibly for VR duties. Around back are three DisplayPort 1.4 emanating from the graphics card, while the Asus ROG Strix X570-I Gaming motherboard provides four USB 3.2 Gen 1 Type-A, four USB 3.2 Gen 2 (three Type-A and one Type-C), as well as Intel-powered Gigabit Ethernet and 2x2 Wi-Fi 6. Plenty of USB, but at this price point we'd liked to have seen faster Ethernet and a front Type-C port, preferably with Thunderbolt support, though it should be noted that Corsair's hands are tied by limited choice when it comes to mini-ITX X570 motherboards. 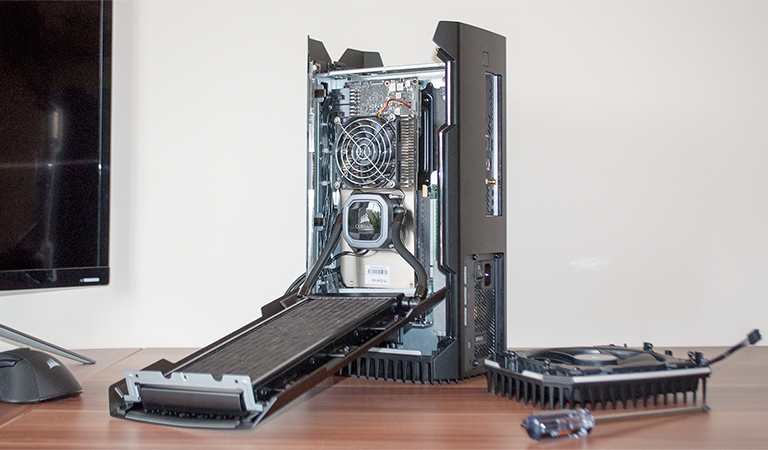 Opening the unit is much the same - the primary top 140mm exhaust fan pulls away at the press of a button - and though you can access internal components, upgradability is still a sticking point. Corsair's list of officially supported upgrades remains limited, and the official line is that "customers can upgrade memory and storage themselves without voiding their warranty as long as they follow these instructions and use only validated parts." Speaking of warranty, two-year cover is included as standard.

You might assume that taming a 16-core processor in such tight confines will be problematic, yet lets not forget that the same Corsair One chassis has previously been outfitted with Intel HEDT processors carrying a 165W TDP. Liquid cooling the 105W Ryzen 9 3950X in our review unit should be straightforward, so Corsair sticks to its tried-and-trusted formula of a 120mm x 170mm radiator attached to the CPU waterblock, in addition to a separate 120mm x 240mm radiator attached to the GPU.

We're impressed at how quiet the entire PC is able to run, however while the cooling configuration works well considering the space restrictions, the balance between CPU and GPU temps could be improved; as our benchmarks will demonstrate a little later in the review, the Ryzen processor gets noticeably warmer than the GeForce chip under load. Then again, the graphics card is aided by an 80mm fan on the heatsink, used to cool memory and voltage regulators. 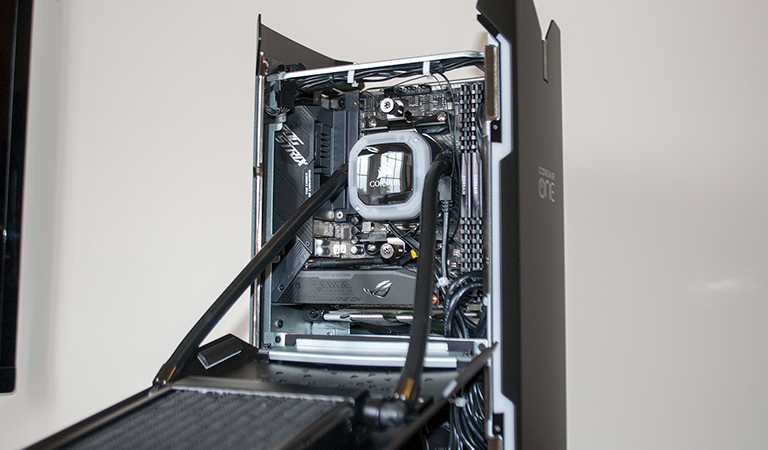 It sure is tight in there, and given the build quality and level of integration, the price premium is to be expected. You could build your own mid-tower 3950X rig for considerably less, but don't expect it to look as good sat alongside the big-screen TV in the living room.

The One's virtue as a powerful, space-saving PC are a known quantity, but how it fares with AMD Ryzen under the hood is yet to be explored. Let's run the benchmarks and see what's what.