Most high quality LCD monitors now feature a Digital Video Interface (DVI), negating the need for image position and geometry adjustment, because the signal being sent to the monitor is no longer analogue.

However, the digital interface itself has its limitations, and we've already reached that limit. Luckily, this was foreseen and so a standardised way of dealing with such a problem was devised. The DVI link between a graphics card an monitor can operate at a bandwidth of 165MHz and no more. At 60Hz this leads to a maximum resolution of 1920x1080. However, large DVI LCD monitors exist that operate beyond that, so how do they do it? The clue is in the cable. 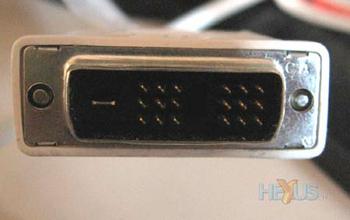 There are a number of pins missing from this DVI connector, and we're going to briefly cover the present and missing ones. We won't bore you with a pin out, however, Google can do that. The DVI connector can, if built do, carry analogue signals, and this happens towards the left of the connector, as you see it, with four pins around the flat horizontal pin in the picture. The block of nine pins to the right of this handle plug and play, power, clock signalling and such. Then we having a missing block of six pins (more on those in a minute), and another nine. The final nine contain the red, green and blue digital signals, sent over pairs of wires, with three shielding wires also. This final set of wires on the right make up a single DVI link.

The gap in the middle is the missing link, as it were. Where a second set of cable pairs is present, another set of red, green and blue signals can be sent, creating a second DVI link. A dual-link DVI interface sends data over both of the DVI links to the monitor, and this is how higher resolutions are achieved. With dual-link DVI, a resolution of 2048 x 1536 is possible... juicy!

Of course, for dual-link to work, the cable, output source and display device must be geared up for it. Some graphics cards will only have a single link DVI transmitter, which leaves you without the ability to run at ultra-high resolutions. So, if you buy a high res DVI monitor, make sure you can hook up a dual-link interface to it.

In summary, then. Dual-link adds an extra set of wires for RGB signalling, allowing the swankiest of monitors to run at resolutions beyond 1920x1080.