Be it gaming, streaming or content creation, Corsair wants to be at the centre of your desktop experience. The firm has slowly but surely ventured into almost every relevant category, and more often than not with favourable results. We don't imagine many would quibble with a Corsair One PC, a Corsair keyboard and mouse, and a wide range of Elgato accessories. Heck, you can even add a Corsair chair if you see fit.

What's missing from the current catalogue? Two things spring to mind; a monitor, and a set of speakers. Corsair is tackling the former with the launch of its first-ever PC display, the Xeneon 32QHD165. 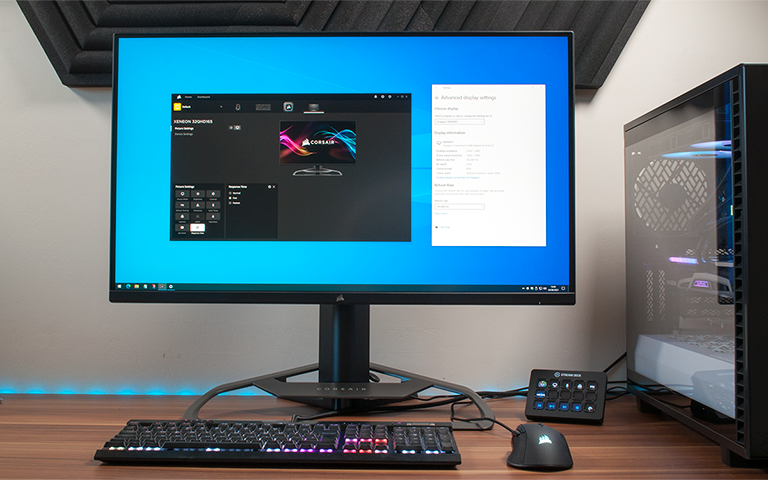 Monitor model designations have a tendency to confuse, but credit to Corsair for picking a sensible sequence of numbers and letters. As the name suggests, this is a 32in panel with a QHD 2,560x1,440 resolution and a 165Hz refresh rate. It would be logical to assume this is the first of many monitors to be launched under the Xeneon umbrella, and there's certainly room to progress as this initial outing does appear somewhat conservative in the specification department.

32in QHD panels with high refresh rates have been available for some time, yet Corsair is in bullish mood and brings the Xeneon to retail at a lofty £700 price point. That's a couple of hundred pounds more than existing competitors, representing a sizeable premium for the Corsair brand. Probably not enough to deter fans, mind you, and to the 32QHD165's credit, overall implementation is tidy and well thought out. 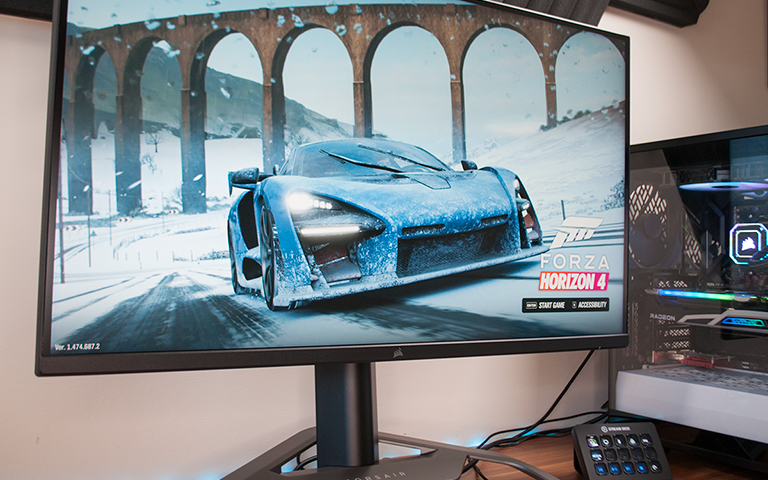 The attraction begins with a 32in Quantum Dot IPS that is primarily intended for gaming. A QHD resolution is in our estimation the best bet for those wanting to balance quality and high refresh rates, and the Xeneon supports AMD FreeSync in the 48 to 165Hz range. The display is also officially certified for Nvidia's G-Sync Compatibility program, and for gamers accustomed to smaller panels, don't underestimate the benefit of a 32in upgrade. Those migrating from, say, a 27in screen can look forward to a 40 per cent increase in display size.

Games look and feel at their best when rendered in excess of 100fps - ghosting does become apparent when performance dips - but achieving such framerates isn't overly arduous at the native resolution. Even with a modest Radeon RX 6700 XT, Forza Horizon 4 benchmarked at 149fps with the ultra quality preset. Do note that DisplayPort is required to activate 165Hz - HDMI is limited to 140Hz- and games consoles configured to output at 4K60 will be downscaled to 1440p. 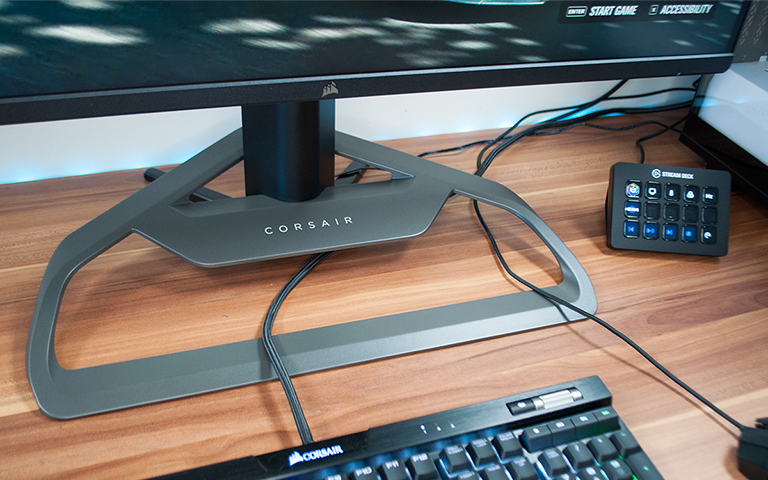 100 per cent AdobeRGB colour coverage, a 1ms MPRT response time (<3ms GTG), and a non-glare coating that plays well with the wide 178° viewing angles add to the display's gaming credentials, but there is room for improvement in other areas. Despite HDR400 certification, the panel offers neither the brightness nor localised dimming needed to drive a convincing HDR experience, and though QHD is a fine fit for gaming, at this size regular desktop use inevitably lacks the pinpoint sharpness of 4K UHD.

These are obvious provisos, yet if you happen to be in the market for a large QHD gaming display, the Xeneon ticks the right boxes and there's more to it than just the panel alone. Corsair's trendy die-cast aluminium stand certainly looks the part and serves as a particularly sturdy base. There's no unwanted wobble and with 110mm of height adjustment, 30° swivel and the ability to tilt -5°/+20°, finding a viewing sweet spot is easy enough. All that's missing is the ability to rotate into a portrait mode. 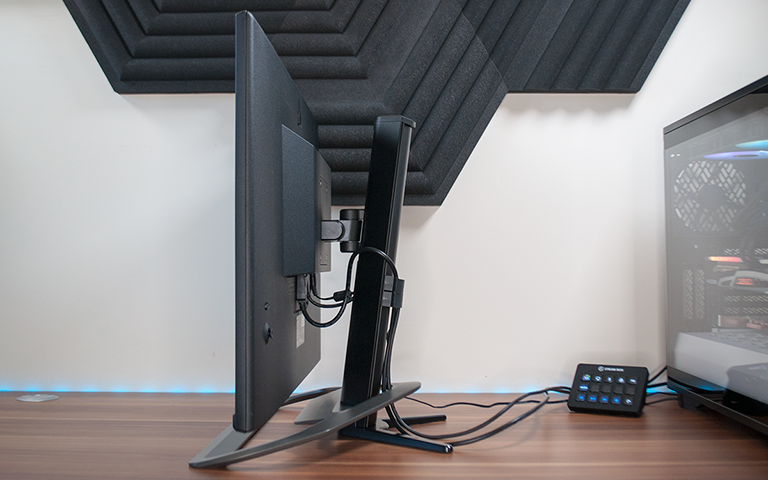 The supplied stand is attached to the 100mm VESA mount using four screws, and though the overall footprint is a little on the large side, the design doesn't feel bulky and for a gaming solution looks elegant when viewed face-on. Given the way most other Corsair products have gone in recent years you may be surprised to learn that there are no RGB lights whatsoever, which is a plus point in our book.

A solitary status LED lines the bottom-front edge and the OSD is navigated by our preferred method; a joystick located around back, just beneath the power button. Corsair has paid attention to the build, but don't be fooled by the promise of "an ultra-thin micro-bezel." Just about every monitor manufacturer now advertises seemingly invisible borders, but rarely do such claims hold true. In the case of the Xeneon, the top and side bezels measure 12mm thick and, while slim, will be clearly noticeable in a multi-monitor setup.