Virtually all PCs that ship today as complete systems do so with flat-panel monitors. These are often referred to as liquid crystal display (LCD) or thin-film transistor (TFT) though the terms are largely interchangeable.

Advances in display manufacturing and associated cost reductions with economies of scale have brought LCD monitors into the mainstream, shipping with budget systems that start at just £400. LCD monitors come in all shapes and sizes, use differing panel technologies and inputs, and it is important to consider your exact requirements before opting for a certain monitor - they are not the same.

LCDs work in a relatively easy method to understand. Firstly, behind each LCD screen, where screens are defined by the number of pixels on a given panel, a light source is shone through from the behind to panel, through two panels of glass sandwiching the LCD, to your eyes. The source is now usually in the form of light-emitting diodes (LEDs), enabling slim monitors, and this is why you see the LED LCD term applied to most flat-panel monitors today.

Drilling down further, each pixel on the LCD display has an array of liquid crystals - from where the name arrives - whose molecules can be charged with a variable amount of voltage from electrodes over each subpixel, where each pixel is divided into red, blue and green filters. This results in varying levels of light, from the source, passing through. Oversimplifying it somewhat, it's the combination of subpixel voltage-switching and light source that make up the images you see.

Each pixel in a monitor can display various colours that are produced by the variable voltage feed to the transistors. Faster switching between opposing colours (usually black-to-white), quoted in milliseconds, is usually a reasonable indicator of the panel's effectiveness in displaying fast-moving images. The lower the ms time, the less time needed to redraw an image and, consequently, the lower the chance of ghosting or smearing when displaying fast-moving images. Manufacturers often have different methods of determining pixel response time, so it requires a little time investment on your part to correctly determine whether the quoted figures between competing manufacturers is a consistent measure. 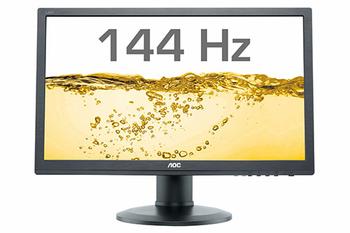 The monitors refresh rate, that is, the number of times a new image can be drawn every second, is an increasingly important factor for gamers. Monitors typically ship with a 60Hz refresh rate, meaning up to 60 updates per second, though gaming-orientated screens can refresh at up to 144Hz. Allied to a powerful graphics card that can sustain those kinds of updates, a fast-refreshing monitor can make a discernible difference to first-person shooter games that rely on ultra-quick reactions.

LCDs can be defined by the technology used to control the amount of refracted light - and by inference, colour - passing through from the source to your eyes. Broadly speaking, three technologies exist, with an array of sub-divisions, and each has its own benefits and disadvantages. Twisted Nematic (TN) LCDs work by literally twisting the liquid crystals in the display. The greater the twisting, controlled by the pixels' transistors, the less light passes through the LCD. Colours can then displayed in relation to just how much light is being transmitted through each pixel. This approach offers fast colour switching (response time) but usually at the cost of poor rendition for dark colours, especially blacks.

In-plane switching (IPS), on the other hand, uses two transistors per pixel, where the voltage is applied at each end of the horizontally-placed liquid crystal. The benefit is better viewing angles resulting from the alignment of the liquid crystal molecules. IPS panels also have, on average, better colour reproduction and brightness than TN panels. On the flipside, IPS screens have relatively slow response times when changing between colours. A recent advancement to IPS technology is called Plane-line switching (PLS), which promises even more brightness at a lower financial and energy cost. 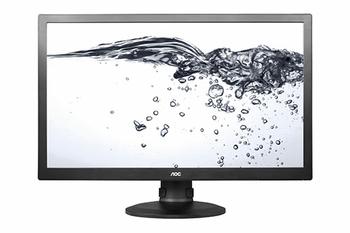 Vertical Alignment (VA) panels take the viewing angle benefits of IPS displays but use a single transistor to do so. With no voltage applied by the pixel's transistor to the naturally vertically-aligned liquid crystal, deeper blacks and richer colours are possible. Voltage application can also turn the liquid crystal from vertical to horizontal, matching the underlying layer and producing a white image. Colour consistency, therefore, is one of the hallmarks of VA displays, though, like IPS, response time and input lag isn't quite as good as TN's.

There are multiple methods by which to connect a computer monitor up to a PC or consumer electronics device. Typically, a computer's graphics card or integrated graphics has a number of outputs. DVI and HDMI outputs are most prevalent on computers and monitors, providing a digital high-definition connection between the two, though some older computer hardware requires what is known as an analogue D-SUB cable.

Premium monitors now ship with a digital connection called DisplayPort, designed to supersede both DVI and HDMI, and the higher-bandwidth potential and ease of integration means that it is likely to be included on mainstream screens in the next year.

What to look out for

There is no perfect monitor technology for all computing scenarios. TN, IPS and VA panels all have their advantages and disadvantages. People who need a monitor with a fast response and refresh time - gamers, typically - should look towards TN-type monitors. Folk who need an all-round screen that has rich colour fidelity and wide viewing angles would be best served by either IPS or VA panels.

For full disclosure, this editorial was sponsored by AOC.