A new study by market researcher IDC forecasts that the mobile Internet will overtake fixed-line broadband in the US by 2015, with Western Europe and Japan not far behind.

There's some slightly ambiguous wording in a release entitled "More Mobile Internet Users Than Wireline Users in the U.S. by 2015", however. IDC says the boom in smartphones and tablets means "By 2015, more U.S. Internet users will access the Internet through mobile devices than through PCs or other wireline devices."

The thing is, much of the time people access the Internet on the mobile devices via Wi-Fi. Indeed, with expensive, capped 3G data plans the norm, it's foolish not to switch off your 3G and use your uncapped wired broadband, via a wireless router, when at home or in the office. So from that statement it's not clear whether IDC is referring to mobile broadband use or merely the use of mobile devices, as opposed to PCs.

Nonetheless the forecast is for US mobile Internet users to increase by a compound 16.6 percent per year until 2015. Furthermore, thanks mainly to an anticipated explosion in tablet use, IDC anticipates the slow decline of the PC. By 2015 you will also have 40 percent of the world online, and both e-commerce and online advertising will almost double.

"Forget what we have taken for granted on how consumers use the Internet," said Karsten Weide, research VP at IDC. "Soon, more users will access the web using mobile devices than using PCs, and it's going to make the Internet a very different place."

Talking about US Internet users, Nielsen has had a look at social media use in the US, and found that two fifths of Americans do so on their mobiles. Furthermore social networking is one of the most featured, and most valued, things on a mobile device over there. 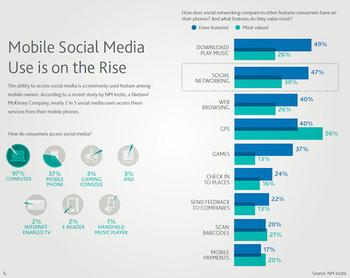 Posted by renald - Thu 15 Sep 2011 10:07
With the growing mobile technology the usage of mobile internet users are also growing. It definitely overtakes accessing through PCs or other wireline devices. People find it as a easy and portable device to access their work as well.
Copyright © 1998 - 2022, HEXUS.net. All rights reserved. HEXUS® is a registered trademark of HEXUS.