Apple has announced that orders for its new iPhone 5 “topped two million in just 24 hours”. For comparison sake that is “more than double the previous record of one million held by iPhone 4S”. Because of demand outstripping supply many folk will get their pre-ordered iPhone 5 during October. However Apple assures us that the “majority of pre-orders will be delivered to customers on September 21”.

The highly anticipated iPhone 5 smartphone was unveiled a week ago and will be available in limited quantities on launch day; Friday 21st September. Long suffering Apple Store queue refugees will be offered a “free Personal Setup service, helping them customize their iPhone 5 by setting up email, showing them new apps from the App Store and more, so they’ll be up and running with their new iPhone before they leave the store”. A toilet, shower and a hot cup of Bovril would probably be better, following their ordeal. People have been queuing in Regent Street four days already... 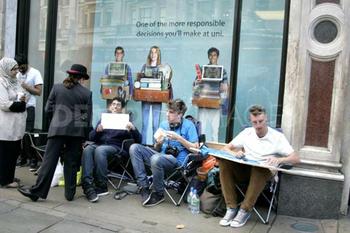 News of the success has pushed Apple’s share price to a new high, the company shares are now trading at almost $700. Analysts expect Apple to sell up to 10 million of the new smartphones by the end of September and that total could reach 60 million before the end of 2012.

Apple’s senior vice president of Worldwide Marketing, Phil Schiller said “iPhone 5 pre-orders have shattered the previous record held by iPhone 4S and the customer response to iPhone 5 has been phenomenal.” He followed that statement by gushing “iPhone 5 is the best iPhone yet, the most beautiful product we’ve ever made, and we hope customers love it as much as we do”.

This launch success is expected, as many iPhone users will upgrade ASAP as a matter of course. However in the longer term, in the face of the muted “more of the same, incremental upgrade” murmurings from the media, will the sales graph fulfil its extrapolated potential?

But - there are some good deals at the moment on the Iphone 5 and my phone contract is due next month.

Android annoys me now, its just not polished or feels finished.

csgohan4
I'll be one of those millions that pre ordered. But somehow the New Nokia WP8 Lumia 920 phone is promising

It is, if Microsoft ever pull their finger out of their !#&$ and let people buy it. I don't understand the mentality of a company that's so desperate to claw at mobile market share, yet refuses to even put a date on their flagship effort as the main competition sail in and release a competing product before them.

The *exact* same thing happened with the Zune. It was genuinely a better product than the iPod, but Microsoft made the thing practically impossible to get hold of in the real world - especially in the UK.
Posted by keithwalton - Tue 18 Sep 2012 12:43
The chart shows sales of that generation in blue, and all previous generations combined in white.

So the white bar for 5 is the two bars of the 4s added together and actually reveals nothing at all about the 5's sales so far.

I guess the economy can't be too bad if people can afford to take a week off work to camp out for a new overpriced (think i read apple are selling them for 5x what it costs to make) piece of hardware.

I'm also guessing those that have been purchasing apple stock are iSheep as well and don't really understand how to make money from it and just want bragging rights that they own 1 billionth of apple.