We all know that tablets and smartphones are selling like hot cakes right now. On Christmas Day there was a huge spike in Android and iOS activations; which were mainly tablets on that festive day. Also we have read lots of doomy predictions and poor financial results by many PC builders and PC component suppliers during 2012 (with the odd exception, such as Lenovo). However a recent report from Forrester Research suggests that while the mobile trend will continue people will still want and need PCs to do “real work”. 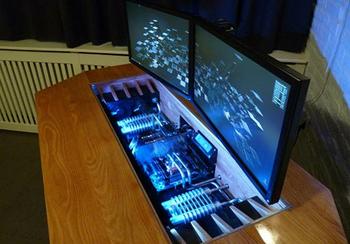 “Tablets will not kill PCs,” wrote Forrester Research analyst Frank Gillett. “Tablets will force them to evolve.” Gillett explains that while people may prefer a tablet when they are on the move many users yearn for the bigger screens, multiple windows and the greater processing power that facilitates “real work”.

PC companies often blame macroeconomic factors for the recent declines in PC sales and Gillett also thinks this is indeed a large contributory factor. Buying tablets and smartphones may have taken away some of consumer’s purchasing power to get the latest PC or laptop in the last year but the decline in PC purchases will end as people “go through this illusion they will do it all on a tablet and realise they can't” explains Gillett.

New figures from Flurry Analytics show that mobile device activations had a significant spike on Christmas Day this year, totalling 17.4 million Android and iOS devices. Also, for the first year ever, more tablets were activated than smartphones (but only just). Take a look at the charts below.

50+ designs scheduled to be released this year by the likes of Asus, Dell, HPE, and Gigabyte.

(sorry I had to)
Posted by zap117 - Mon 31 Dec 2012 11:31
Well that was pretty obvious. But I wouldn't even blame macroeconomic factors on the decline of desktop sales, but rather the fact that most people don't need computers more powerful than we already have to do everyday tasks, so there's no reason to upgrade. Even if you want to be able to play the latest games, you really only need to upgrade a few parts every 3 or 4 years or so.
Posted by ET3D - Mon 31 Dec 2012 12:08
Shoddy piece of analysis. What does “it will force them to evolve” even mean? That they will evolve into tablets? That's possible and already happening. But worse, the analysis assumes that tablet OS's won't evolve. There are already Android apps which can open as windows over other apps, and there are apps that can do pretty much anything a normal user would want, from editing photos to word processing to app development. They are raw, but that doesn't mean they won't evolve. Tablets (and phones) can also hook up to larger displays through HDMI or wirelessly, and to input devices.

In the short term I don't think that PC's will die, but in the long term I think that the paradigm of a highly mobile device plus a dock will win. That won't mean the death of the PC, because the definition of “PC” will change, like we think of laptops right now as PC's, even though that's not the image we had a few years ago. Ten years down the line we might have a phone which hooks wirelessly to our monitor and keyboard, and it might even run full Windows, and we'll think of it as a PC.

Edit: Who knows, maybe 10 years from now wearable computers will really work and be common.
Posted by wasabi - Mon 31 Dec 2012 15:03
Worse - MS are moving PCs into the dumbed down area of tablets where users don't have much real control over the device they own, they just pay the money and install ‘Apps’ from a walled garden. PC games are becoming like that with Steam / Uplay etc, and the MS store for Windows ‘Apps’ is leading us that way too. The idea of a ‘program’ is alien speak.

On the whole it was inevitable. 99 percent of end users blindly click on adverts saying ‘your computer registry has an error - click here to install Regclean Turbo’ to fix it - baddam - instant spyware on PC. Leaving the walled garden is too much for most.
Posted by crossy - Mon 31 Dec 2012 15:15

Totally agree (and especially with the rest of that quote that I cut out). Looking around my relatives with PC's and you're talking Skype, browsing, email, strategy games and the odd letter and bank planning sheet. Now how much of that actually needs a decent PC? Answer is “none”.

What's needed is dockable PC's whose docks allow the connection of mouse and keyboard plus higher resolution (NOT larger - my tablets can already connect to any HDMI-equipped TV). I can easily forsee that homes with decent tablets and games consoles wouldn't need a PC. Especially as the non-Apple tablets can “do” USB - in which case the MS Surface (and clones) deserves to do very well indeed.

On the other hand there will always be folks whose business or home needs are such that they definitely need that extra power. Anyone who wants to rip MP3*/MP4's, developers, video production, sound engineers, etc, and of course the denizens of Hexus.

So no, PC's are by no means “dead” (I'm holding onto mine!!!) but you'll definitely see the crappy low end gear disappear. E.g. I was looking at some Acer with a low-spec Pentium B series processor, same price as a Galaxy Note tablet, and I'd have no problems choosing the tablet. Like I said though, folks who need or want that high-end buzz are still going to be buying PC's into the future.

(* Edit: someone just pointed out that the Brennan gear manages to rip CD's, so what's to stop someone doing a NAS style device that has the same capability)