Amazon has announced that its Fire TV HD set-top box will be coming to the UK. A launch date has been set for 23rd October. The news comes months after the device launched in the US, where it has gained a positive market reception, so we are told. "Following this interest we accelerated our road map and doubled down to get Fire TV on sale outside the US," Peter Larson, Amazon's VP of Product Marketing said, announcing the news at the IFA show. 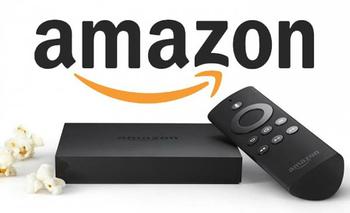 The company is now taking pre-orders, selling the Fire TV at £79. However, existing and new Amazon Prime members will be able to grab themselves a 'bargain' with £30 off the original price, in a deal which only lasts until Monday 8th September. The box comes with a 30-day free Amazon Prime Instant Video trial, an effort by Amazon to lure users into signing up to a monthly subscription or yearly fee.

The UK version of Amazon Fire TV will come bundled with apps for Sky News, Spotify, YouTube and Demand 5, along with access to Twitch, Netflix and Amazon's Prime Instant Video service. Unfortunately, BBC, 4OD, ITV and Now TV have not signed up to the set-top box as yet, which could be a turn-off for many British customers. There will also be a gaming system on board and a dedicated gaming controller is available (controller sold separately). 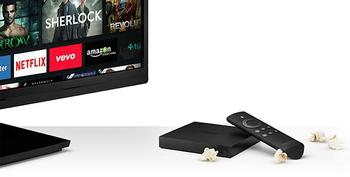 Specs wise, the set-top box has a quad-core processor with 2GB of RAM, an Adreno 320 graphics chip and voice control capability thanks to a microphone integrated into the remote. Its processing power is said to be three times that of the Apple TV - helping you enjoy smooth, fluid entertainment in up to 1080p HD. Furthermore, the Fire TV is equipped with Wispersync technology, allowing all your content to be synced to the set-top box as soon as it is turned on. The feature will also allow users to pick up TV shows and films where they left off on another Amazon device or computer.

This has been confirmed by Amazon to a user on another site I visit.

Looks like a good unit, can be rooted, have the google play store loaded on to it, xbmc, sideload apk's, use a 360 controller with it etc. Very tempted!
Posted by Hicks12 - Thu 04 Sep 2014 15:10
I preordered as soon as I saw the prime discount, for only 20 quid more than the Chromecast you get something that doesn't require a mirrored source (albeit at a larger footprint). I have a chrome cast already but this had me sold as you can install the play store on it :D(check XDA before turning on as I think you need to root before allowing updates).

I have the student prime and its cheaper than before yet has amazing instant, I've actually used it more than netflix now so I have found it useful however the annoying thing is that it is not on android (except Amazon's fork of android) so I haven't been able to use on the tablet nor on my TV so this will be a worthy work around.

Curious how the device performs with Amazon instant as I find the desktop web player is terrible. I have huge lag spikes (even mouse lags… Hard) while it buffers initially and then a lot of the time the resume playback buffers correctly then goes all the way back to the start! Sometimes it even gets stuck in a buffer loop, it uses silver light so I expected silky smooth performance like Netflix, my 2500k at 4.5ghz m4 ssds and 7950 should not struggle lol!
Posted by Noxvayl - Thu 04 Sep 2014 16:10
I'll use the good old fashion HTPC for my viewing needs but my parents need something like this to bring them into the 21st century. Still pay Sky for movies and a ridiculous amount of other things they have no need for.
Posted by Jonj1611 - Fri 05 Sep 2014 08:02
I dont know how many more set top boxes my TV stand can handle!
Copyright © 1998 - 2020, HEXUS.net. All rights reserved. HEXUS® is a registered trademark of HEXUS.