You are here:
Gadgets Systems News

There have been rumours of an Asus alternative to the Raspberry Pi being launched and now such a board is available to buy. The Asus 90MB0QY1-M0EAY0 Tinker Board, to give it its full title, shares many physical attributes to the RasPi such as size and positioning of ports and GPIO but offers quite a bit more power on tap. 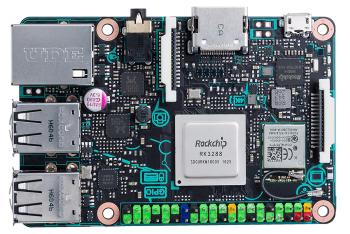 Asus seems to believe the capabilities of the Tinker Board will make possible projects that were too much to ask of even for the newest Raspberry Pi revision. 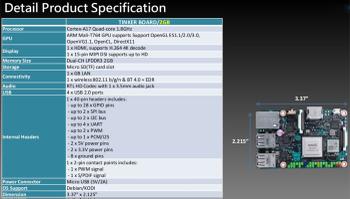 Above you can see the full specification table of the Asus Tinker Board. Beyond these basic tech specs I found out that the board idles with 1080p HDMI output at 2.25W, or 2W without an attached HDMI display. The maximum power consumption of the board is 5W. In comparison the RasPi 3 uses a maximum of about 3.7W. These are important considerations for compact, sometimes battery powered, maker boards. For further handy comparisons please check out the table below, from Asus.

The Tinker's CPU is significantly faster, of course, is capable of 4K30 output, has Gigabyte Ethernet, twice the RAM, H.265 support (not listed, mind) and much-improved audio, which costs £20 alone.

For software Asus says that it has released its own OS for the Tinker Board, based upon Debian like the Raspberry Pi OS. It also claims to be working on wider OS support, considering the likes of Ubuntu and OpenSUSE, as well as Kodi support. 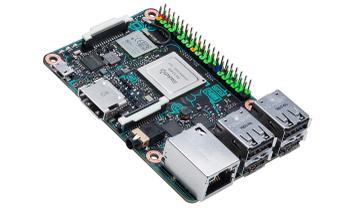 As mentioned in the intro, the Asus Tinker Board is available now. It costs £55, which is a significant chunk more than the RasPi 3 at £34, but more than reasonable given the improvements.

Claims to offer twice the scratch resistance of Gorilla Glass 6.

Posted by chinf - Fri 20 Jan 2017 13:53
By now, the RPi is far more than just the bare board, it's an established system of supporting materials (development and education), community, market, third-party add-ons, etc. The raw Asus board certainly adds another option for hobbyists, but when comparing it with RPi it would be good to know more about things like compatibility, add-ons, community support and so on.
Posted by AndyN33 - Fri 20 Jan 2017 14:29
If the connections are the same and they can run the same OS, then hopefully the extras for the RPi will also work with this, giving people more choice.
Posted by Irien - Fri 20 Jan 2017 14:50
The rockchip processor is usually far less “open” than other solutions (eg. Pi) so unless Asus are able to provide better documentation or developer resources, I very much doubt it'll be able to offer the level of flexibility that the Pi has done.

It'd be nice if I'm wrong, but Chinese SoC manufacturers are notorious for this, which is (in part) why the likes of BananaPi et al haven't exploded in the way the Raspberry has.
Posted by bledd - Fri 20 Jan 2017 15:41
No H265? What were they thinking.
Posted by imadaily - Fri 20 Jan 2017 15:42
If a board of those specs (fast processor, 2GB RAM and GbE) was released by the raspberry pi foundation I would have purchased at least one already. I know that ASUS can clearly make good products, however I just don't trust them be able to offer anyway near the level of support available from the RPF and pi community.

If you get stuck with anything on the raspberry pi, there is usually a guide on how to fix it and if not, the forums are pretty good at helping you sort out the problems. Of course, with the compute module 3 now having guaranteed availability until 2023 there will likely be support for rasbian running on the BCM2837 until at least then!

I'm just hoping that Raspberry Pi can make something very similar to this, though we're probably a few years off.