Samsung has taken the wraps off a powerful new smartphone which it describes as "the future," and claims that it creates a "whole new mobile category". The Samsung Galaxy Fold is pretty much what we expected from previous Samsung presentations and recent leaks leading up to the Unpacked event. Developed over eight years the Galaxy Fold is perhaps better refined than we could have expected compared to the prototype we saw briefly back in November. For a folding device it seems to be pleasingly thin, and the specs are definitely flagship, however the price seems to be in a "whole new mobile category" too.

The tech specs of the Galaxy Fold are certainly impressive, from the use of two AMOLED screens (one with folding tech), to the triple rear camera, dual front camera, and cover camera, to the 12GB of RAM, 512GB of UFS3.0 storage, dual-battery offering about 4,300mAh, and the use of an unspecified 7nm 64-bit Octa-core processor. Below you will find the official specs table for your convenience. 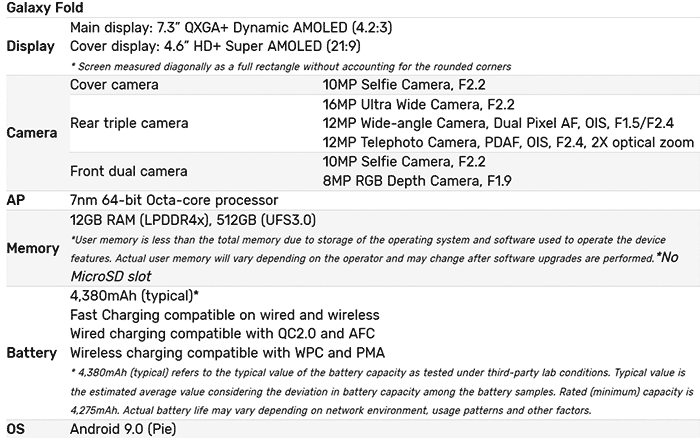 While the specs are very appealing, the key to this device's success will be down to how well it functions and the appeal of its 7.3-inch display to users. Samsung shared a reasonably thorough demonstration on stage at Unpacked, you can see it fold/unfold and extended functionality talked about in the full Galaxy Unpacked 2019 live stream from about 31 minutes onwards. 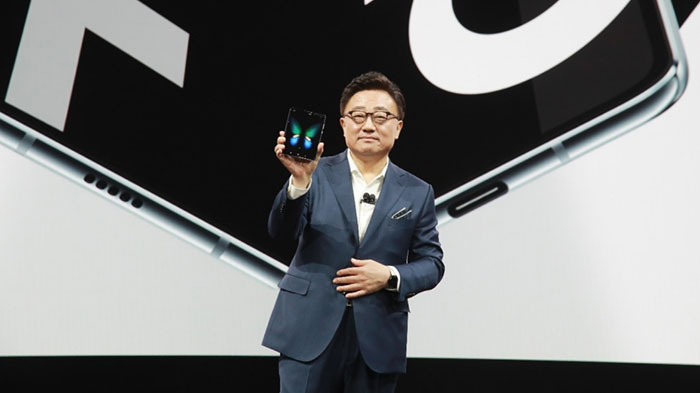 On the topic of that hinge, it is facilitated by the main screen's polymer construction, and a hinging mechanism with interlocking gears. It has been tested to withstand 200,000 folds, which adds-up to about 5 years usage if you fold/unfold the device 100 times a day. 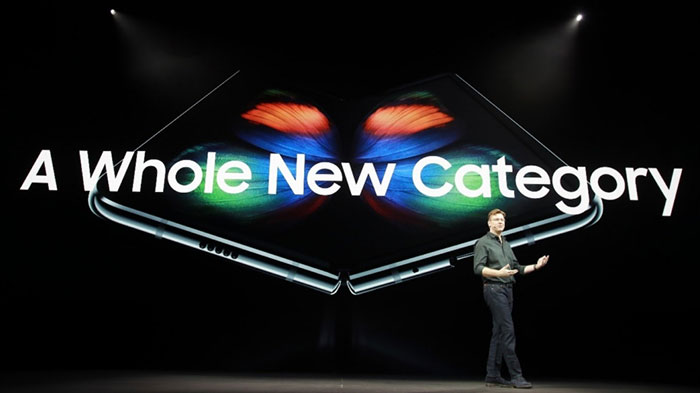 Three apps can multitask on the big screen quite comfortably using 'Multi-Active Window' - so you can "surf, text, work, watch and share". 'App continuity' plays a big part in the UI experience. When using Google Maps, for example, you can close the screen and the map will reappear on the smaller front screen. Whatsapp, Facebook, YouTube and Microsoft Office, and other major apps will be optimised for this functionality too. DeX works with the Fold too. 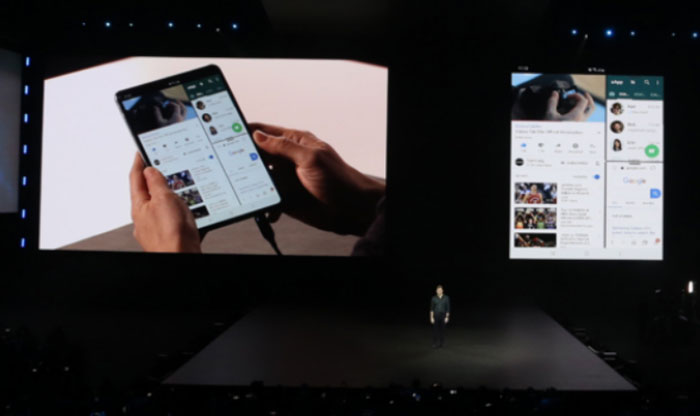 A 4G version of the Galaxy Fold will become available starting from 26th April at $1,980 (£1,515). Choose from silver, black, green or blue, with hinge colour personalisation options too. Samsung promises to deliver a more expensive Galaxy Fold 5G version later in the year. 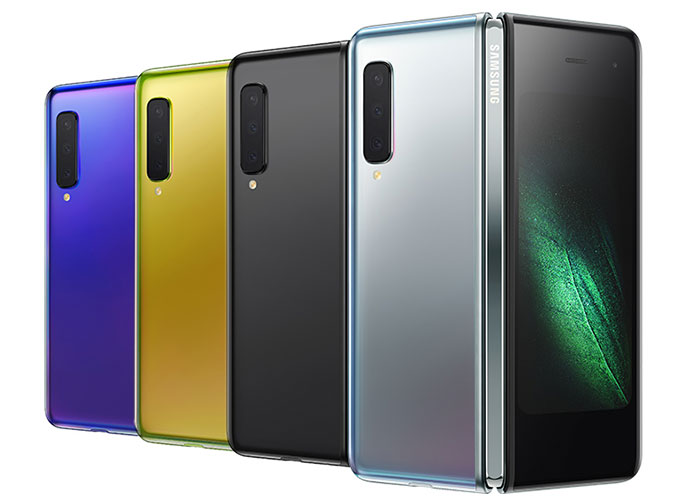 Niche market at the moment at that price point I reckon.

I'd prefer a smaller foldable phone, like the concept motorola razr folding.

Will probably wait till gen 2 and lower prices. Once all the competition starts making the same, the market will lean towards more foldable phones, making them more affordable and innovative.
Posted by Jonj1611 - Thu 21 Feb 2019 10:29
Looks good, could see myself using one, however not a chance at that price and would like to see it thinner.
Posted by Hoonigan - Thu 21 Feb 2019 10:52
Their release video just screams Apple. The whole thing reeks of it.
Posted by Zhaoman - Thu 21 Feb 2019 12:17
Looks good but I'd want it thinner, more ergonomic and at a sensible price (by sensible I mean <£400). Maybe two or three generations down the line I'll have another look… My rate of technology adoption has slowed right down lately, I can see my Surface Book and Mi6 lasting a good few years yet as long as the battery holds out (which they are doing so far after 3.5 years). None of the recent releases seem to excite me…
Posted by Ttaskmaster - Thu 21 Feb 2019 12:30
Yes!!!!!
More of these, please!
Eventually it will filter down to the cheaper models, whereupon I'll get one free with a £20 a month contract (might even stretch to £30 a month for this) and enjoy playing mobile games on a tablet sized screen.

Not so bothered about the thickness so much as the HxW footprint, as I'm old fashioned and like to use archaic things like pockets for carrying stuff.

Hoonigan
Their release video just screams Apple. The whole thing reeks of it.

Surely one will still sue the other over copyright on the number of tenths of a degree that the screen hinges pivot, or something like that?
TBH, every phone that has come out since the iPhone has reeked and screamed of Apple, just like every Sci-Fi since 1977 has been accused of ripping off Star Wars… Nobody else cares, so long as they get what they want at an affordable (or at least acceptably expensive) price.