Xiaomi has unveiled its new Mi5 flagship smartphone which will be sold in three versions, with slight tweaks to the core specs, with pricing starting at £219. Despite the pricing, as a top of the range smartphone the Mi5 seems to tick all the right boxes, it sports one of the new Qualcomm Snapdragon 820 processors paired with 4GB of DDR4 and up to 128GB of UFS storage, these phones also have fingerprint sensors, OIS cameras and are designed in a 5-inch form factor 3D ceramic body. 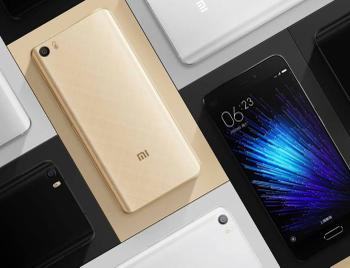 Before we start looking at the different models, let's bullet point the key specifications common in all Xiaomi Mi5 smartphones: 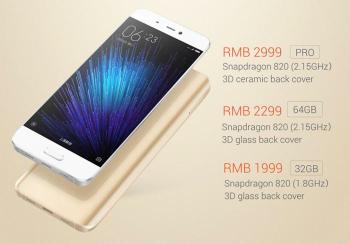 There are three models based upon the above specs, they vary in the amount of built-in storage, processor speed and the top model differentiates itself further with a different 3D body construction material. Please refer to the picture above for the summary. As you can see in the picture, depending on the specs you wish for you pay between RMB 1999 (£219) and RMB 2999 (£329). 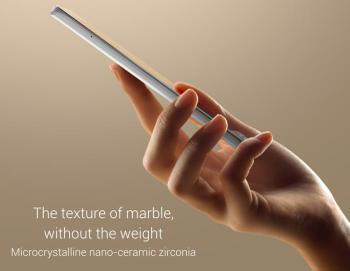 Particular boasts Xiaomi has made about the Mi 5 are that its AnTuTu score, at 142,084, is "beyond anything you’ve seen in a smartphone". At the launch we were also told it can be charged from empty to between 80 and 90 per cent in an hour thanks to Qualcomm Quick Charge 3.0. 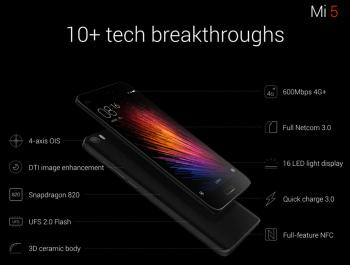 As with any flagship smartphone quite a bit of the budget has gone into the camera and the Xiaomi looks appealing in this respect with a 16MP Sony IMX 298 sensor, f/2.0 aperture lens and 4-axis optical image stabilization (OIS). At the front there is a 4MP Ultrapixel selfie camera. 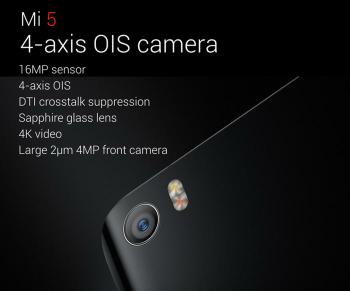 The Xiaomi Mi5 will go on sale on 1st March in China before rolling out to other markets. It may well not be launched in markets like the US and UK, however it should be easily obtainable via the usual internet shop warehouses. Like the Mi4 it is expected to get a Windows 10 ROM.

Posted by kalniel - Thu 25 Feb 2016 09:45
Very nice. Do you happen to know the dimensions? I'm liking the choice of phones in the £2-300 range these days - they're finally getting the message about battery etc. as well. Shame not a OLED based display I guess.