What happened to the Samsung Galaxy Note 6? It looks like Samsung will skip that iteration and head straight to number seven if the usually reliable @evleaks is correct. Furthermore, we have a smattering of promised specifications from the same source. 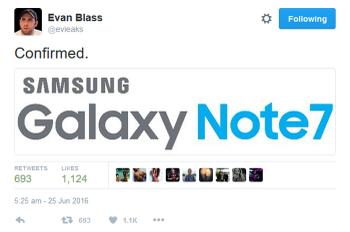 Starting with the branding and confirmed name for Samsung's next flagship phablet: yes, it's going to be called the Samsung Galaxy Note 7, as you can see from the logo. Mr Blass revealed that Samsung won't be making a Note 7 and a Note 7 Edge, there will be just the one model, with an edge-like curved display - but it won't carry the 'Edge' suffix.

The Note 7's specs look rather appealing. This 5.7-inch curved QHD Super AMOLED screened device will pack an iris scanner for security. It will offer 64GB of built-in storage plus microSD expandability, a 12MP dual-pixel autofocus camera system and a 5MP selfie cam, and IP68 dust/water resistance rating. That leaves a few key specs uncertain, such as RAM, USB connector type, processor, and a few others. Colours available will be black, silver, and blue coral.

Various Twitterers were impressed by Samsung managing to make an IP68 Note with expandable storage and, of course, the S Pen silo design.

Google is readying to launch its own designed and branded smartphone, according to The Daily Telegraph. Before the year is out this new device, not to be confused with the Nexus range of devices, will be launched to bring Google's hardware vision to the market.

The new Google device will allow the firm to flex its design muscles and exert tighter control over design, manufacturing and software. If you are trying to envision what this means perhaps its useful to think of other Google hardware such as the Chromecast, Pixel C 2-in-1, and Chromebook Pixel. It will be fascinating to see how Google pitches its own smartphone(s) when/if they launch later this year.

Posted by excalibur1814 - Mon 27 Jun 2016 12:54
…and the camera still, probably sucks. When are any of these companies going to drop a new 1020 type camera? They won't do it. Why not? They'll save the improved stuff for years to come in order to max the $$$$ milking.
Posted by wyte_w0lf - Mon 27 Jun 2016 14:17
I wanted a non curved note 7. Im still using the note 3. Its a good phone. About time for an upgrade, but i really dont like the curve screens. Im glad the sd card slot is included. And 64gb internal is a nice size.
Posted by chinf - Mon 27 Jun 2016 14:32
Even though there is competition from the Chinese brands it's still too weak to force the market leaders to play all their cards up front. I'd like to see improved photographic capabilities too, but am not hopeful.

Is there any news on how the new Note will take advantage of the curved screen edge? I'm not sure there has been a significant benefit found from it yet.
Posted by Faiakes - Mon 27 Jun 2016 16:37
Usb 3.1 type c?
Storage type?
Posted by darcotech - Tue 28 Jun 2016 15:53
Did you guys actually see photos that Samsung Galaxy S7 can make? Beats Iphone 6s (which is supposed to be the best), especially in the low light. I have both (for dev) so I can compare.

As for curved display, I am with others, its more gimmick than anything else.