FIFA through the ages

Before we begin, let’s clear one thing up. I’m not a FIFA fanboy. I still buy both Pro Evolution Soccer and FIFA each year and then spend a few weeks making a balanced decision on which game I've enjoyed playing the most, before trading the other in or selling it on.

Like many of my Xbox live friends, there was a stage where I switched over from being a Pro Evo fan to playing FIFA religiously. This switch of allegiances has led me to writing this article. Why did I move from Pro Evo to FIFA? How has the series evolved over the years? How did it begin as the best soccer game on the planet, lose its crown, and then regain it in the last couple of years?

Prior to 2001,since 1993 in fact, there was one football title that stood head and shoulders above any other soccer videogame out there.The FIFA series held onto its glistening crown and stood unchallenged for 8 years, until a real contender came along.

Whilst EA sat back and thought it could get away with minor updates to its FIFA series year after year, adding a few more official licenses and tweaking the graphics here and there, Konami released its rival Pro Evolution Soccer series and almost overnight a divide was created between those loyal FIFA fans who’d spent the last 8 years playing EA’s soccer title, and those who preferred the free-flowing, tactical and more realistic soccer title, Pro Evolution. 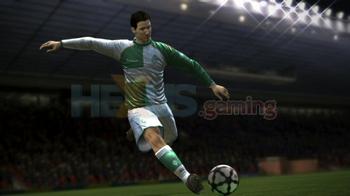 EA had been lazy, churning out the same old game year after year, and its domination was challenged by Konami’s title which grew from strength to strength gaining an ever increasing number of supporters who were drawn in by its ultra-realistic and deep gameplay. Pro Evo became the game of the true football fan, and although FIFA still sold well, it's arcadey and simplistic approach to matters on the pitch was ridiculed by Pro Evo players, who preferred substance over style.