HEXUS has reported upon the Smach Z gaming handheld PC a number of times throughout its gestation. It has been a long process, with our first report on the handheld published back in 2015 - and that was a continuation of a project dubbed the 'Steam Boy', from further back in time.

Now it is promised that the project is really close to bearing fruit. At E3 in Los Angeles the portable gaming PC will be shown off in its final hardware form and the firm is taking pre-orders on a choice of three models with varying amounts of RAM and storage. Pre-orders get approx 10 per cent off what are touted as standard retail prices set for general availability. 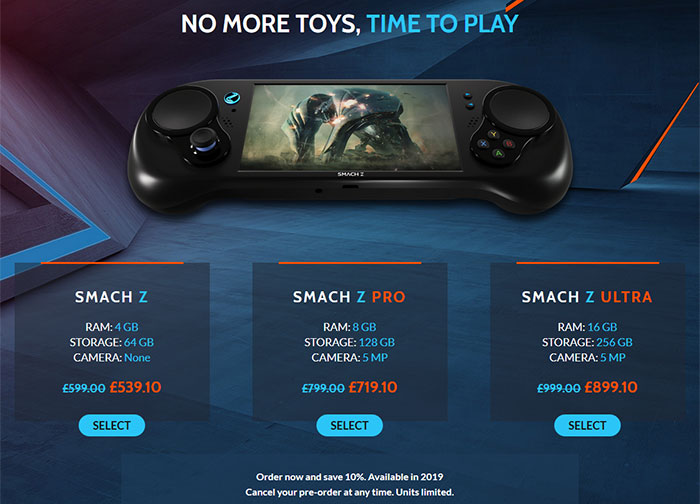 Other key specs and features of the portable include; a Ryzen Embedded V1605B SoC with AMD Radeon Vega 8 graphics, Linux or Windows 10 compatibility, a 6-inch FHD touchscreen, twin haptic touch pads, and a plethora of other joysticks and controls, Wi-Fi, Bluetooth, USB Type-C, Type-A, and micro USB ports, DisplayPort, and a microSD card slot, plus a fast charge battery (45mins) that lasts between 2 to 7 hours of gaming dependent upon the title and screen brightness etc.

Example frame rates, from the firm's own testing, are as follows:

Despite the series of delays seen throughout its history, perhaps this time the Smach Z will meet its goal of hardware general availability this year.

Currently a Japan exclusive, this retro 2xAAA battery portable sports a 1.15in screen.

Light at the end of the tunnel, two years after the project launched on Indiegogo.