Nintendo has unveiled the long rumoured update to its docking hybrid Switch games console, which it first released in 2017. The new 'Nintendo Switch (OLED model)' - its official name includes those brackets - has a couple of significant upgrades. However, some of the 'Switch Pro' rumours regarding an updated SoC, and 4K DLSS capabilities, seem to have been way off the mark.

As per its name, the main upgrade delivered to the Nintendo Switch (OLED model), which will come with a US$50 premium to the existing model, is its screen. It is bigger at 7-inches in diagonal, offers the appealing OLED deep blacks and rich colours, and it fits in the same size unit so offers reduced bezels, and this makes sure docks (and Joy-Cons) are cross-compatible. In addition to the screen changes there are some other changes / upgrades and for quick reference and simplicity I have charted all the changed specs and features below. 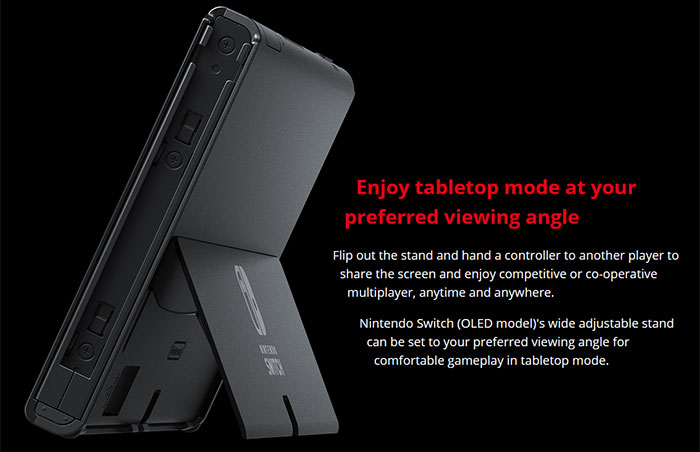 So, what happened with the new Nvidia SoC, DLSS, and 4K Switch gaming? The original Switch is still selling like hot cakes, and it is possible that Nintendo would have difficulty sourcing new and advanced processors in the current state of semiconductor market. Executive Director & Video Game Industry Advisor, The NPD Group, Mat Piscatella observes that "The Switch OLED is right out of this successful playbook". He reasons that the new revision will stabilise the demand curve for the Switch console, "maintaining sales performance, and preventing the pull of price drops and stale inventory". 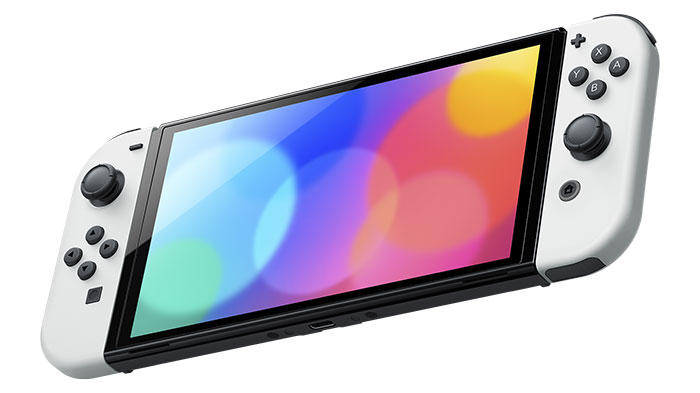 Having read various comments on forums and from gaming industry names, it does seem that the extra $50 for the Nintendo Switch (OLED model) won't upset the apple cart of sales for this generation, but keep it ticking over smoothly. A beefed-up 4K upgrade, as per the Bloomberg sourced rumours, is more likely to come next year.

If you are interested in the OLED screen packing Switch, it will become available starting from 8th October and in the US it has an MSRP of $349.99. Nintendo UK says it will come with an RRP of £309.99.

spacein_vader
So is the existing version staying on sale alongside this?

That seems to be the plan for the time being.
Posted by ilh - Wed 07 Jul 2021 09:56
After having recently used the kickstand recently for the first time I think the upgrade to it in the new model should have been in from the start. The original is far too small, unstable and leaves the Switch too vertical for use on something like a coffee table.
Posted by bae85 - Wed 07 Jul 2021 10:40
'So, what happened with the new Nvidia SoC, DLSS, and 4K Switch gaming?' If it ain't broke, why fix it? is probably the reason why. The Switch is selling more than all the other consoles combined at the moment.
Posted by LSG501 - Wed 07 Jul 2021 10:42

bae85
'So, what happened with the new Nvidia SoC, DLSS, and 4K Switch gaming?' If it ain't broke, why fix it? is probably the reason why. The Switch is selling more than all the other consoles combined at the moment.

That minor thing called shortages on things like cpu's might also be playing a part in the lack of a new soc. Have the design ready to go but release ‘next year’ instead.