Games publishing goliath Electronic Arts has apologised for a trio of April Fools' Tweets which made fun of the underpowered nature of Nintendo's Wii U console. The barbed April 1st Tweets came from the Frostbite Engine team. The Tweets may have given false hope to Wii U owners that graphically rich and popular EA titles such as Battlefield 4 would become available for their console. The publisher is, in reality, working on no Wii U titles whatsoever, reports GameSpot. 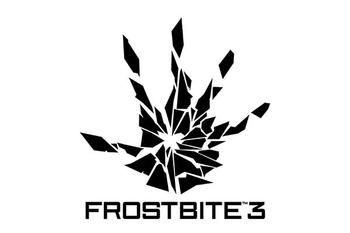 Frostbite Tweets from yesterday (since deleted) included the following (via Kotaku):

"Good news, we have finally fixed and optimized our 'netcode'. Uses quantum entanglement for Zero Latency connections. Exclusively on #WiiU."

"Frostbite now runs on the #WiiU since it is the most powerful Gen4 platform, our renderer is now optimized for Mario and Zelda."

Last night Peter Moore, EA's Chief Operating Officer (COO) decided to voice his distaste for the Frostbite pranking. In a Tweet he strongly condemned Frostbite's Wii U jibes and labelled the Tweets as "unacceptable, stupid". Moore also apologised to the Nintendo company and its fans. 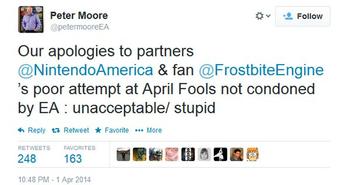 Frostbite 3 is used in blockbuster games titles such as Battlefield 4 and Need for Speed: Rivals and is also expected to power the upcoming Star Wars: Battlefront game, among others. However games using Version 3 of the Frostbite engine won't ever come to the Wii U, largely because Frostbite 2 offered mediocre performance on the Wii U. However it is possible that the mobile version, Frostbite Go, could power some EA Wii U games in the future.

What do readers think about Frostbite's April Fools' Nintendo taunts?

I don't have a WiiU, but I can see there's a market there for certain game types, and hell - why not if you like that kind of thing.

Of course, the sad thing is that EA itself makes poorly optimised, rushed out games and pushes them solely on their woeful excuse for a gaming platform. I was given BF4 as a gift, and I tried to like it - I certainly gave it a fair chance - but there were just so many things wrong with it, including poor performance on high end hardware, game-breaking bugs, Origin, broken squad/friends system on launch, ‘immersion’ which completely ruined gameplay… I could go on.

Perhaps before EA makes jokes at the expense of others - even ‘mildly amusing’ jokes like this- they should look towards fixing their own systems and titles first…
Posted by McEwin - Wed 02 Apr 2014 11:35
is the singular “fan” a typo or Freudian slip? Or is there only 1 fan?
Posted by kalniel - Wed 02 Apr 2014 11:47

shaithis
I saw nothing wrong with it….they were blatantly having a laugh. Quantum entanglement and WiiU being the fastest nextgen platform…..come on…..you don't need to be that clued-up to see the fun in it.

It's a joke at a potential partner's expense. That's just bad business. They might not be partners this round but EA are trying not to be seen as silly enough to cut themselves off from future work.
Posted by HalloweenJack - Wed 02 Apr 2014 12:00
It was nt even funny - and as Kalneil said , EA are in it for the long term , so why cut off a potential future market - now as a show of good measure , they should release a game or 2 on wiiu…. crisis and bf4 for example ;)