Blizzard has announced that it will launch Starcraft Remastered this summer. The original StarCraft debuted in 1998 and became renowned for its great RTS playability, which blends asymmetric factions with a meticulous balance. It became a staple of eSports tournaments worldwide years ago. Research has shown the deep strategy of StarCraft can improve your cognitive flexibility but the AI in the game can't yet match the best human players.

Now Blizzard has remastered StarCraft with its 'award winning' Brood War expansion. From summer players will be able to enjoy StarCraft more fully on modern systems with updated visuals - 4K UHD and widescreen support. Blizzard says players can "Zoom out for a Battlecruiser’s view of the battlefield, or zoom in to see the veins on a Mutalisk’s wings." Units, buildings, and environments are all redrawn in new detail. The developers have also added faction-themed comic book interludes, and re-recorded dialogue and soundtrack audio. 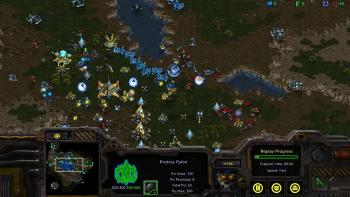 Under the bonnet StarCraft has received updates to allow advanced matchmaking, full connectivity to Blizzard’s gaming network for social features and updates; cloud saving for campaign progress, custom maps, replays, and keybinds, support for eight new languages in addition to the original five, and more.

With the update this summer, Mike Morhaime, CEO and cofounder of Blizzard Entertainment, said that "With StarCraft: Remastered, we're modernizing the original game's visuals, audio, and online support to ensure that players can enjoy StarCraft for another 20 years and beyond". The Remaster will be made available for both PC and Mac, pricing is yet to be divulged.

Ahead of the Remaster release this summer, StarCraft: Brood War will be updated to v1.18 (later this week). This update to the original will contain bug fixes and improvements such as the ability to rebind keys, observer mode, modern anti-cheat measures and compatibility improvements from new Windows OSes. Once the v1.18 update goes live the SD version of StarCraft will become free for all, as the StarCraft Anthology, from Blizzard's online store.

However, we don't have an exact date or pricing - and Halo Infinite has been delayed to 2021.

Posted by 3s-gtech - Mon 27 Mar 2017 11:35
Cue moaning by some in the community that it should be offered for free to existing owners (that picked it up for £4 as a re-release). Good on them though, there's a market for re-masters (not just reboots) of classic games - I can think of plenty that I'd re-buy.
Posted by chj - Mon 27 Mar 2017 12:29
Having never played it I'd be interested in getting this remaster.
Posted by nobodyspecial - Mon 27 Mar 2017 21:09
Only interesting if I can plan lan with no connection to them. I'm not interested in being tied to someone's servers that may die at any time. DRM free for me only. I skipped Diablo3 and I'll keep skipping their games until they stop that crap. Too many other games I can play DRM free at GOG.com etc FOREVER even if a company goes belly up.
Posted by b0redom - Tue 28 Mar 2017 10:45
Whilst they MAY die at any time, given that I was playing Warcraft 3 online at the weekend which was released in 2002 and their main revenue stream is probably still WoW which is exclusively online, I'd say it's unlikely the servers will be going away any time soon.
Posted by Lichachron - Mon 03 Apr 2017 17:11
The mother of all strategy games in now free and remaster.
You can't play multiplayer if you don't have a Wow account or Starcraft 2 etc
but still totally worth it.
Copyright © 1998 - 2020, HEXUS.net. All rights reserved. HEXUS® is a registered trademark of HEXUS.