EA's Need for Speed: Payback racing game is due for release in November. As usual, you might expect to have some pre-order bonus content on offer, to incentivise putting down your cash ahead of any third party reviews of this game. However, EA seems to be pushing the envelope about what kinds of extras are acceptable to include in pre-orders, and their exclusivity.

The particularly controversial incentive that EA is offering with pre-orders of one edition of Need for Speed: Payback is an offer of "Exclusive Tire Smoke". TechPowerUp spotted that in a listing for this game on Electronics Boutique Australia, where pre-purchasers of this AU$99 title qualify for this graphical effect exclusive. 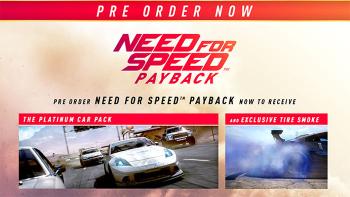 The Platinum edition on PS4, in the example, qualifies for an exclusive car pack, which is the kind of incentive one might expect. However the blue tire smoke is "exclusive to Platinum Car Pack vehicles". If the regular game doesn't include any tire smoke, yet this platinum edition pre-order does, that will leave many a gamer feeling rather miffed. What next, we might ask: pre-order exclusive flames, character faces, muzzle flashes, explosions etc - depending upon game genre the list of graphical effects is endless.

Hopefully, the exclusivity will just be centred on the tire smoke blue colour, reading between the lines on the EB Australia product page. In other editions of the new Need for Speed: Payback everyone should get grey tire smoke, at least, one might think.

EA has a history of pushing extras via DLC and micropayments a little too far for the comfort of many gamers (and the ASA), but it makes billions from such activity. On the other hand it gives away some excellent older titles On the House, and if you buy slightly older EA games the various historic add-ons and DLCs are often bundled in.

Posted by shaithis - Tue 18 Jul 2017 13:26
and probably re-introduces the old “petrol” micro-transactions they have used in the past…
Posted by Bagpuss - Tue 18 Jul 2017 13:47
Whichever trendy little bearded hipster moron at EA's marketing department came up with this sort of nonsense deserves a public flogging and be made to drink instant coffee for the rest of their miserable lives.

It's the thin end of the wedge and needs to be stopped now.
Posted by Dashers - Tue 18 Jul 2017 14:00
Not only have EA made me change my behaviour to never pre-order, they've even pushed me as far as not even buying games on day one but waiting for the real-player reviews to surface.

I now sink less money into gaming as I'm not paying day one prices, and I'm not buying games that are so bad I have to go out and buy something else a week later.

I must admit though, I did spend £1 on a green laser for my ship in Elite. But as I've probably got 700 hours in the game, I felt that a pound for old rope being chucked the way of the developer wasn't to be missed.
Posted by Jonj1611 - Tue 18 Jul 2017 14:20
Must admit “tyre smoke” sounds a bit naff.
Posted by cheesemp - Tue 18 Jul 2017 14:50
Who preorders? Its a mugs game. At least wait for reviews or even better wait a year for the game of the year edition with all the DLC. Buying this stuff only encourages the publishers…