Apex Legends has barnstormed the gaming world and with such momentum it looks like it will continue to make waves in the gaming industry. HEXUS reported upon the out-of-the-blue launch, and its subsequent rocketing past a million players (8 hours), to 10 million (72 hours), and then 25 million in week one. Even Nvidia's Jensen Huang has commented that the game's impact has been "pretty spectacular".

With Respawn / EA's latest game attraction such footfall it is only natural that the scourge of the gaming community, cheaters, have followed rather rapidly. In a recent update from Respawn, on Reddit, the Apex Legends team reported that they have already identified and banned more than 16,000 cheaters. 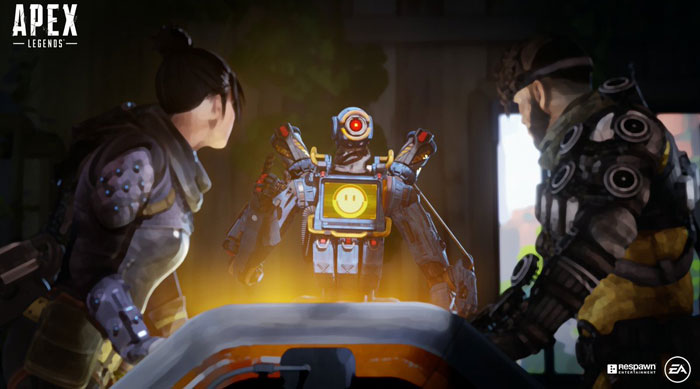 As Respawn asserts, "cheaters suck". The devs ask that if you run into one, please try and capture the evidence and let them know here. Even without an ykind of proof you are welcome to get the cheater's ID and flag it so investigations can be undertaken in order to improve the game. It might sounds like a bit of a faff to capture screens, leave the game and upload them with descriptions to a third party site so Respawn has hinted strongly that it will implement something more convenient and immediate in-game.

Even at this early stage there is a strong community of modders and similar growing around Apex Legends, reports VG247. Interestingly dataminers have had some nosey success with the game files and "found various references to new game modes, new characters (Legends), and even some fresh cosmetic content," reports the source.

On the topic of game modes, @RealApexLeaks found references to a mode dubbed 'Survival' which will feature spectator and commentator NPCs. These spectators can cheer players on and have emotes too. Other new possible modes have been unearthed by @ApexUpdate, going by the name of Solo and Duos modes.

Those wishing to have a wider range of heroes to choose from might be pleased with RealApexLeaks for finding at least two more playable characters; Octane with his Stim injection skill, and Wattson with his Tesla trap. Some unreleased weapons have been spotted too.

Apparently the first 'big content drop' for Apex Legends is due next month as the Battle Pass launches. Already there are founders and starter packs with coins, skins, banners and badges, as well as Apex Coins packs of various amounts. This is the way that EA will monetise the game, however only cosmetic things are purchasable with in-game currency at the current time and hopefully it will stay that way.

Posted by fynxer - Tue 19 Feb 2019 11:31
It is AMAZING that they did NOT have an in game cheat report system from day 1. Cheaters are the no1 threat to the future of PC fps multiplayer games and developers still lag with their anti cheat efforts like they think their game will be spared by cheaters. Look at BFV, no in game cheat report system and ONLY server side anti cheat has now made the game packed with cheaters to the degree that i stop playing it. There is only one real threat to Apex Legends and that is cheaters, it will be the differens if ReSpawn makes a sh!tload of money or not. No player want to invest money in cosmetics if the game is overrun by cheaters, how can this be hard to understand.
Posted by GinoLatino - Tue 19 Feb 2019 11:51
16k is a very small number…
Posted by Disturbedguy - Tue 19 Feb 2019 12:39

16K compared to the number of players is small, but 16K people banned in a few weeks, is good going.

developers still lag with their anti cheat efforts like they think their game will be spared by cheaters.

I doubt its a case of Respawn or anyone thinking they are immune to cheaters, its likely more to do with they don't know HOW the cheaters are doing to code their cheats, its almost impossible to cover every eventuality. So sometimes they have to wait for cheats to be released so they can then patch them.

As an example, before Christmas a number of PUBB pro players were banned for cheating and if memory serves, one of these cheats, essentially cast the games mini map to your mobile phone but showed the enemy players positions…how do you anticipate something like that?
Posted by LeSWiS - Tue 19 Feb 2019 16:01

Mark Tyson;1229410
however only cosmetic things are purchasable with in-game currency at the current time and hopefully it will stay that way

False statement. You can buy 2 legends that are locked from the get go (Mirage & Caustic) with in-game currency. It's a form of pay to win however you want to see it or not.
Posted by Rejuvination - Tue 19 Feb 2019 16:22

Mark Tyson;1229410
however only cosmetic things are purchasable with in-game currency at the current time and hopefully it will stay that way

False statement. You can buy 2 legends that are locked from the get go (Mirage & Caustic) with in-game currency. It's a form of pay to win however you want to see it or not.

Exactly and i think the other 2 mentioned in this post will be part of the Battle Pass so players will buy it and others that might appear will either be part of packs or the same as the 2 we already have. Sp its a Pay to win game already as these 2 already can change the game style a lot, with traps and illusions..