Activision has officially revealed the next video game in its most successful first-person shooter series, Call of Duty: Advanced Warfare. The announcement was bought forward in schedule due to a succession of unexpected major leaks on Friday. The heavyweight publisher released its previously leaked trailer and confirmed a 4th November release date for the game, along with more details about the storyline and background for this new chapter.

"Set in the year 2054, a private military corporation (PMC) has emerged with the power to rescue humanity from a devastated world struggling to rebuild after a global attack on its military and infrastructure. You are the advanced soldier. Empowered with new, cutting-edge exoskeleton abilities, technological advancements and high-tech gear, players join the ranks of a highly-trained, specialized unit committed to restoring order in a state of advanced warfare," reads a synopsis provided by Activision.

The trailer below features House of Cards star Kevin Spacey as the leader of a private military company who has turned on the U.S.

The Call of Duty franchise has been widely successful, with 2012's Black Ops taking the game to its peak of popularity, shifting over 7.5 million copies on its launch day and reaching $1 billion in revenue after only two weeks. Last year's CoD:Ghosts did not exceed Black Ops' performance yet was still one of the biggest selling titles of 2013, placed just below GTA 5, having sold 20 million copies.

"We've made several key decisions with an eye towards creative excellence on Call of Duty: Advanced Warfare. We've really approached this game differently," said Eric Hirshberg, CEO of Activision Publishing. "This is our first three-year development cycle. It's our first time with Sledgehammer Games at the creative helm. And we're shaking up the formula in several ways. New core gameplay mechanics with the exoskeleton suit. A riveting new story. An iconic new character played by one of the world's best actors in Kevin Spacey. We're having a lot of fun making this game, and we think the world is going to have even more fun playing it."

Pre-orders of the game are available worldwide now, and it will be available on PC, Xbox One, PS4, Xbox 360 and PS3, with no Wii U version available.

Nostalgic PC gaming types may be happy to know that Blizzard is releasing games for free right now via its Battle.net service. The free games available include; The Lost Vikings, Rock 'n' Roll Racing and Blackthrone.

To access these free games, users will need to go into their Battle.net account and go to the 'Download Game Clients' page. The trio of games will be shown underneath all the clients for games you already own. 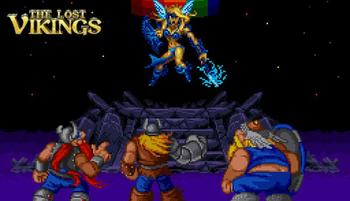 Posted by Biscuit - Mon 05 May 2014 13:10
Looks like more of the same but with extra gimmicks, just like all the other COD games ever since COD4. Ideas clearly stolen from Crysis.

Biscuit
Looks like more of the same but with extra gimmicks, just like all the other COD games ever since COD4. Ideas clearly stolen from Crysis.

This cow aint got any more milk!

zzzzzzzzzzzzzzzzzzzzzzzzzz
Posted by Hicks12 - Mon 05 May 2014 13:57
Is it me or does that video show a handful of clips of actual ingame footage? Seems pointless saying its captured on xbox one when infact most of it is a cutscene…. look at The Old Republic and their cut-scenes are mental (they could have a full film base on these… id watch it).

COD is pathetic now adays with a simple rehash of the same old stuff, even assets are being reused! I hope it flops because quite frankly its annoying how many sales this franchise gets when its piss poor yet other genuinely good and innovative games get shutdown.

Low expectations of this game, still refused to buy any COD game after the first modern warfare game, even the online side of that game was too easy but its got worse :(/
Posted by YoloSwag - Mon 05 May 2014 14:01
These guys keep doing the same thing over and over again. No special things - It went to a point where it feels like you're playing in an arcade with just waves of enemies coming.