Sony Computer Entertainment has finally unveiled the hand-held that we all knew was coming, the PSP2, which the company has currently codenamed: NGP.

Social connectivity appears to be the buzz phrase that Sony is using in its official press release to accompany the announcement, where it describes the device as "having both Wi-Fi and 3G network connectivity, together with various applications, NGP will enable infinite possibilities for users to "encounter," "connect," "discover," "share" and "play" with friends wherever they are."

The NGP comes packed with three motion sensors, a gyroscope, an accelerometer and electronic compass - all technologies that feature in the motion-sensing periperheral for PS3, PlayStation Move. It has an oval shape, two cameras on the front and back, and will sport two analog sticks. The multi-touch 960x544 OLED display will measure 5 inches and will allow you to interact with games in "three dimension-like motion, through "touch, grab, trace, push and pull" moves of the fingers."

Community features will include the "LiveArea" which allows users to share the gaming experience with others, as well as connect to the PlayStation Network, compare acheivements and "trigger real-time communication." The device will include 3G, GPS and Wi-Fi functionality and will be big on downloads, with users being able to access the PlayStation Store with ease and purchase the latest titles. This will be possible via the new storage-based system - a flash memory based card that you can store data on. 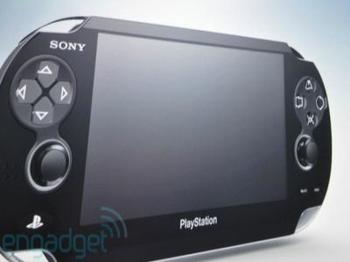 The first picture of the NGP, courtesy of Engadget

The NGP is due to launch before the end of this year, 2011, but no price point has been confirmed.

More pictures can be seen at Engadget

Pricing, what do we think? £300 a possibility or will the compete with the 3DS pricing to try to gain a foothold (although do they need it with the Android platform in the works as well?) Maybe the PSP2 will just be the usual high price/performance Sony product.

Also Killzone, I HAVE to watch some video of these now!


Posted by Funkstar - Thu 27 Jan 2011 10:23
My feeling is they will price it however they want, and won't be swayed by the 3DS pricing. After all, they didn't bow to pressure on the PS3 pricing in comparison to the Wii or Xbox 360.

No idea how the average public will see it, but I would look at this to be a very different beast to the 3DS, the fact it is a beast is the main reason and a massive jump up from anything we have seen in the hand held market. The 3DS is yet another iteration on the DS theme… 5th iteration I think?

I'm not sure if I like the design of the rear touchpad, I thought it was just a generic almost carbon fibre pattern until I saw the close up.

Also don't forget there will also be texture/AA differences as well. It won't compare to a PS3 in reality but tech has moved on since the PS3 launched. On a smaller screen you can get away with lots less detail.