With Monster Hunter Tri due to launch on April 23rd, now could be the perfect time to get a taste of the series that has been such a massive hit in Japan.

Hunters from across Europe will be able to join the adventure, journeying on their own individual quests as well as joining forces and competing in team battles, all set in a realistic, living and breathing ecosystem.

Unsurprisingly, Monster Hunter Tri involves fighting a variety of beasts. In the game every monster behaves uniquely, based on meticulous research of real world creatures. They weaken and become slower the longer they fight, and begin to prowl to find food for energy. Packs of smaller monsters attack larger monsters in a food-chain system where the strong feed on the weak.

To succeed, you’ll have to learn the skills required to be a successful hunter. After customising your hunter’s look at the start of the game, you’ll set off on various quests on which you’ll uncover new items to use. Carve horns, scales, fur, hide and bones from slain monsters to upgrade your armour and weapons…so that you’re ready to take on tougher challenges.

The game features new monsters and new environments, including underwater levels and marine-based monsters. There is also the introduction of new weapons such as the powerful Switch Axe to master throughout the world.

The game’s beautiful landscapes make this one of the most impressive-looking games on the system. An open-ended, quest-based storyline with multiple routes to progression also looks to offer a huge amount of repeat gameplay. 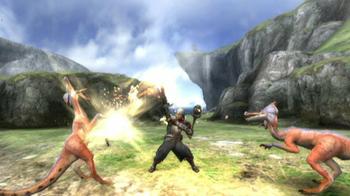 Multiplayer gameplay options include a two player, split screen co-operative mode as well as an online multiplayer mode that’s free for hunters in Europe. The game is fully functional with Wii Speak, the microphone-based accessory that allows you to speak to your friends over the internet.