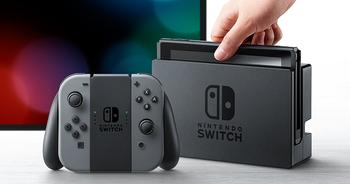 The cat is finally out of the bag. Nintendo's next major games console, Switch, will launch worldwide on March 3rd at a cost of £279 in the UK or $299 in the US.

Pre-orders are now open and the default bundle will include "the main console, Joy-Con (L) and Joy-Con (R) controllers, a Joy-Con grip (to which two Joy-Con are attached and used as one controller), a set of Joy-Con wrist straps, a Nintendo Switch dock (which holds the main console and connects it to a TV), an HDMI cable and an AC adapter."

An assortment of paraphernalia, but then, this is the first games console to promise "a full home-console experience anytime, anywhere." Switch isn't short on intrigue, however the details made available at Nintendo's event earlier today have elicited a mixed response.

There are concerns over the asking price, which happens to be greater than that of an Xbox One or PlayStation 4, and gamers have reacted negatively to the cost of certain Switch accessories. A further set of Joy-Con controllers will fetch $79.99, while a more traditional Pro Controller will be priced at $69.99.

Nintendo has revealed little in terms of underlying hardware, though we do know that Switch carries a 6.2in 720p display and 32GB of internal storage (expandable by SD card) while that battery life is estimated at between 2.5 and 6.5 hours depending on game.

The are also plans to introduce a premium subscription service for online multiplayer in the Autumn, but on the plus side, Switch will be region free, it charges via convenient USB Type-C, and being a Nintendo device it's surely going to be served by a range of fantastic games.

Plenty of food for thought, so let's gauge your initial reaction by asking: will you be buying a Nintendo Switch? Share your thoughts using the comments facility below.

Acer announces Predator Orion 7000 (Alder Lake) gaming desktop SteelSeries launches the Apex 3 TKL for US$44.99 / €54.99 Nintendo Switch is on track to eclipse the Wii and Game Boy Nintendo Switch OLED model will be released on 8th October Nintendo Switch Pro systems will be available as soon as Sept

The Nvidia shield failed spectacularly at half this price. I think the problem is the console market is driven by kids and people obsessed with performance numbers and this might not appeal to either. You never know though, Nintendo are probably the only firm people will over pay for because of the games.
Posted by nar53 - Fri 13 Jan 2017 16:55
Not a chance.
Posted by Ferral - Fri 13 Jan 2017 16:57
It seems quite extortionate given what it is, I did read that it is more powerful when docked, release no doubt will see if it is true.

Don't get me wrong, the new innovation is pretty cool but pricing is way to high, for those 2 controller side pieces they are saying £75 per set which still puts a flashy tablet and dock at £200. Then also the whole charging a monthly fee like PS+ or XBLive Gold, according to Eurogamer you get 1 game per month, either a NES or SNES classic, now it is a bit ambiguous but it sounds like you only get the game for a month, not like PS+ where you can re-download something from ages ago provided you added it to account and have a live sub and it stays with you until you uninstall it.

Just have to wait and see, I am not really seeing anything better than the Wii U at the moment, maybe they should have done a Wii U refresh with more power, normal controller and so on to draw in the crowds.

I want one yes, but at that price most likely not

Here's hoping on a SNES Mini………