The Punisher gets his weapon out in Soho


Now it’s not often that you’ll find me hanging around Soho, well, not in daylight hours anyway, but today was a little different. I’d been given the privilege of an invite to a preview screening of The Punisher from THQ. Luckily, the place was easy to find, which was good as asking directions to small private cinemas in the Soho area can lead you into all sorts of trouble.

Being new and keen, I superbly managed to turn up half an hour early, but that did have the advantage of being able to talk to Jon Brooke and Sam Forrest from THQ without anyone else interrupting. Jon has done a fair whack of research into the Punisher universe, finding working on the game to be a credible excuse to start reading comics again. I have to agree with him that it’s a popular misconception that comics are just for kids. The Punisher in particular is a violent and extremely graphic adult comic… definitely not something for the Beano readers amongst us. Of course, the other advantage of being early is I managed good half hour on the game without worrying how my efforts would be viewed by others. Just as well as the variety of options you have to control your character are mind boggling… 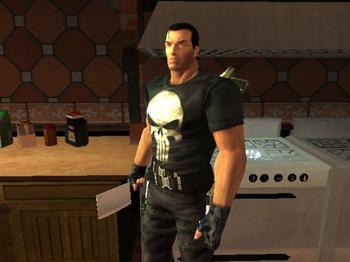 Now you can be forgiven for not even knowing who The Punisher is, as the comics he stars in have something of a cult following, even though they’ve been around since 1986. The game’s style is loosely based on the work of Garth Ennis and Steve Dillon, the comic’s current writers. Their work is darkly humorous, with a fair touch of violence, so obviously the game is pulling in an 18 rating. THQ are also keen to point out that the game is based on the comics and not on the film, though the game is being voiced by the film’s star, Thomas Jane.

I have to admit that I was expecting a fairly standard film tie-in, you know, the formulaic stuff that gets churned out to squeeze every possible penny out of a movie license. But, as THQ are at pains to point out, the game is based solely on the Marvel comics which allows them much more freedom with level design, though they have tipped a nod to the film with a couple of the levels, just to keep movie fans happy. 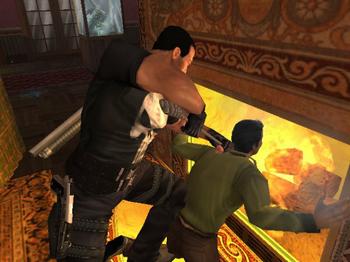 With all this in mind, I was more than pleasantly surprised to find a well polished game, that, though not as steeped in bitter emotion as the Max Payne games, is still as dark and ‘film noirish’ in its own particular fashion. In fact, comparisons between The Punisher and Max Payne will come thick and fast as players will find the two have a lot in common. I won’t go into details yet, but lets just say that they’re histories are very similar. Fans of the Punisher could argue, and with good reason, that The Punisher originally inspired Max, which could be true seeing as the comics have been around for nearly twenty years.

So on to the game itself, in which you guide The Punisher through three digital weeks of mayhem. Oddly, the game starts off with you in prison, but all becomes clear as the story is told in flashbacks which you play through, gradually bringing you up to date. In a nutshell, The Punisher turns full on vigilante, wiping out bad guys as and when he finds them. The vigilante attitude lends a new angle to the game though, as you get rewarded for occasionally showing mercy to the scum you meet. 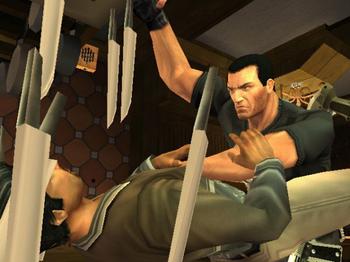 Mercy? How do you show mercy? Well, other than shooting the hell out of everyone and everything, you can capture baddies and interrogate them for information. Ok, so this involves a certain amount of ‘roughing up’, but once you’ve broken them you can turn them free. In some cases they may help you through a part of the level, or give you a hint to secret areas, but showing mercy earns you points… and with those points you can upgrade your weapons and armour etc.

In fact, the interrogation part of the game is one of its most enjoyable aspects. You have to intimidate captives using a variety of methods, some of which make use of the scenery around you, such as a sash window, a coffin lid or even a wood chipper! The trick is to keep a marker within a bar on the bad guy’s stress meter… go too high and you’ll kill him, too low and he won’t talk. 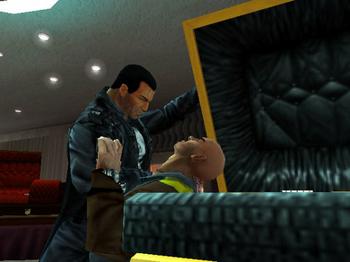 The variety in how you do things isn’t just limited to interrogations though. You’ve got just as many, if not more, ways to kill the enemies you come across. First off, there’s the straight option of just shooting them. You have a massive variety of weapons to choose from to help you. You can only carry one large weapon, such as a shotgun or assault rifle, and two smaller weapons such as Uzis or pistols. You can equip two of either type of weapon at once and fire them independently of each other, but you can only holster one large gun. If that sounds a little limiting, you can pick up fallen enemies weapons wherever you find them. Weapons aren’t just limited to things that go bang… you’ve got a nice range of knives, grenades, pipes, bats and bottles to use too… even TV sets!

But the variety isn’t just limited to what you use… it’s how you use it too. Each and every weapon has several unique killing moves for use up close. Now, this is an 18 rated game, so some of those moves even had me, a hardened gore veteran, wincing. Equip a grenade, get up close and ram it into a baddies gob, then retreat to a safe distance… or grab the meat cleaver and do some face chopping… the flame thrower is a particularly unpleasant way to go, especially Punisher style! You’ll know when the game is out as the Daily Mail will be decrying those killing moves with their usual dramatised headlines. 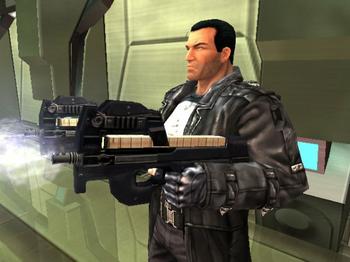 But THQ haven’t left it there, not only have they given us plenty of ways to dispose of baddies with lots of different weapons, they’ve given us a whole raft of ways to use the surroundings to help bring a quick end to the gangsters you’ll encounter. Up in a building? Why not grab a guy and toss him out the window? In a garage? Pull the lever and drop a car on him. Nothing to hand of that sort? Well turn him round and use him as a human shield… or kick him through a door ahead of you so he goes down in a hail of bullets while you pick off his friends.

Of course, no shooter these days is complete unless it has some form of bullet time and Punisher is no exception. Of course, THQ has added a twist. Their version sees you ditching your weapons and going at it mano a mano with a nasty looking pair of knives, and once again, you’ve got lots of options as to how you use them. 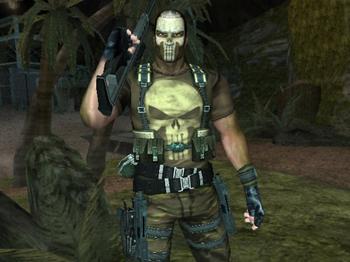 So having had a good hour or so of play, and a nice in-depth look around the rest of the game thanks to the infinitely more skilled THQ chaps Sam and Jon, the Punisher is shaping up to be one of those games that is surprisingly enjoyable to play, despite what your pre-conceptions might say. The sheer variety in the game, the superb transition of the comic’s black humour and dark, bleak universe make it one to keep a close eye on.

Slated for an April release, the Punisher will be released on PC, X-Box and PS2 simultaneously.