Pilot Down: Behind Enemy Lines

Right now we’re flooded with a rash of games based on World War 2, there’s the Medal of Honour series going strong, even if it’s looking a bit tired as our European Assault Review testifies. Then there’s Call of Duty with it’s expansions and the upcoming Call Of Duty 2, and that’s not to mention Return to Castle Wolfenstein, Battlefield 1942, the Commandos series and many others that just aren’t as memorable…So it comes as a refreshing change to play a game that places the emphasis firmly on going slow, taking your time and formulating a plan... Welcome to our hands on preview of Pilot Down: Behind Enemy Lines. 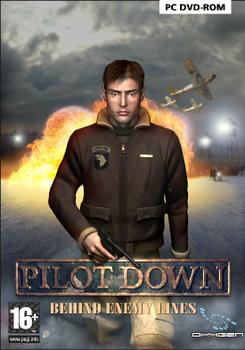 After three years of development by Kuju, Pilot Down: Behind Enemy Lines is finally nearly completion and is due for release in late August this year. We were lucky enough to get our hands on a preview code to see if we could make it to the resistance before being caught by the Germans. 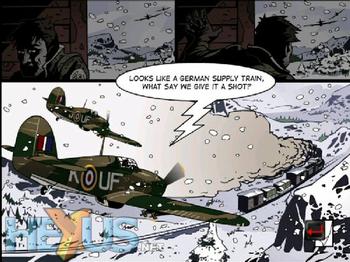 As it’s name suggests, Pilot Down: Behind Enemy Lines sees you playing the part of Bill Foster, a US Airman shot out of the sky whilst on a bombing mission in his B-25 Liberator over enemy territory. As with downed pilots in the war, your mission is to escape and evade the German forces hunting you, make your way back to friendly territory and escape to fly again. 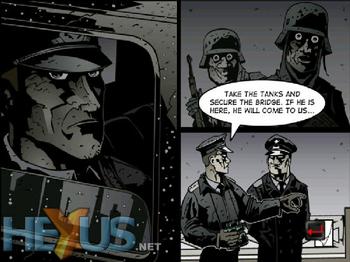 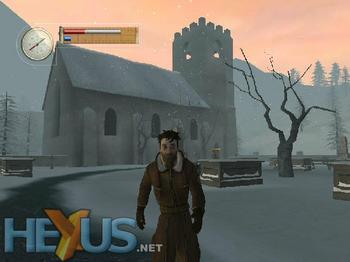 The game covers your exploits over 9 levels as you use every trick in the book to confound the enemy, disrupt their war effort and keep yourself alive and free in the middle of a harsh winter in a hostile country. Along the way Bill must make use of whatever comes to hand to evade the ruthless pursuit masterminded by the notorious Luftwaffe pilot, Captain Killinger. 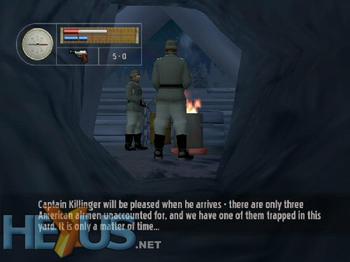 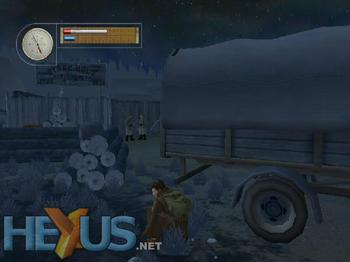 Immediately noticeable is Pilot Down’s unique graphical style. With a cartoon style look that eschews realism for stylism, Pilot Down doesn’t go as far as XIII’s cel shaded graphics but neatly sits in the middle. As the screens show, though the detail is there where it’s needed, the overall sense is more of a comic book than an attempt at emulating a realistic environment. 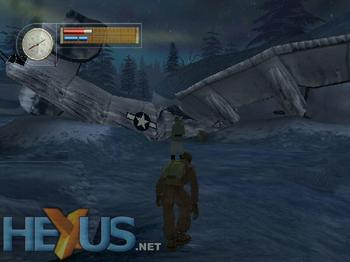 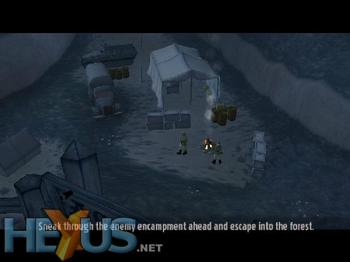 This is cartoon feel is reinforced by the cutscenes that preceed the start of each level. The more mature gamer will be reminded of those war comic greats like Battle and Victor as the cutscenes are told in comic book fashion with each cell of the comic’s story popping up, replete with sound effects and dialogue, to tell you what’s going on and what you have to do in the upcoming mission. Peppered throughout the game are additional cut scenes utilising the game’s engine… these add a little more substance to the story and more often than not kick in when you discover a secondary objective whilst on the course of your mission. 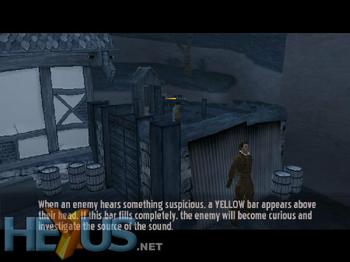 Played from a third person perspective, Pilot Down: Behind Enemy Lines uses an interesting mix of shooter and RPG elements with a fair bit of sneaky stealth stuff thrown in too. There’s an inventory system in place for storing and using items you find on your travels and performing certain tasks gains you experience points which can be used to increase Bill’s health and endurance. 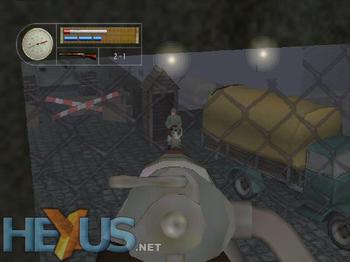 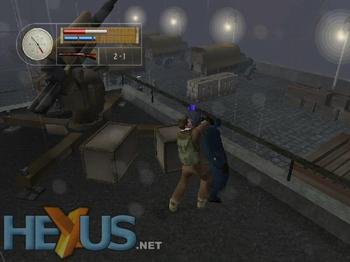 As well as watching Bill’s health, you have to keep a close eye on his endurance meter. Being stuck out in the cold all the time takes its toll and unless Bill eats regularly, he could find that the enemy firing at him becomes a secondary problem next to freezing to death. Wading through cold water or just spending too long sitting still can knock the endurance meter down so far that Bill will start to sneeze… a sure give away if you’re hiding out waiting for a patrolling guard to pass. 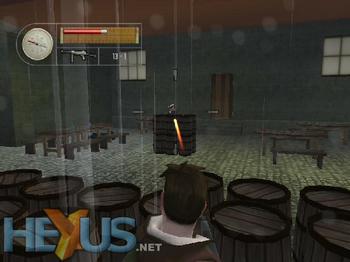 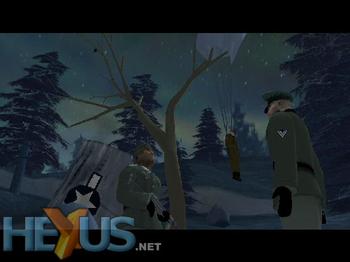 From the preview build I’ve played, Pilot Down: Behind Enemy Lines is an interesting new slant on the action/stealth genre. Whilst be nothing like and of the Splinter Cell games in looks or design, much of the core gameplay is similar. Happily, Pilot Down doesn’t make the mistake of trying to rip off Sam Fisher but offers a simpler gameplay experience that is just as tense in places as Sam and night vision goggles ever were. 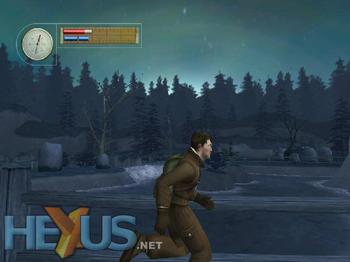 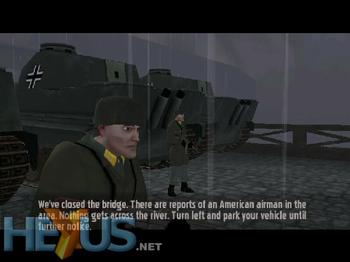 The enemy AI react to sights and sounds, so legging it all over the place is sure to get you heard nice and early and running into soldier’s sights. You can go for head on combat if you fancy, and sometimes this is unavoidable, but you’re usually better off waiting behind cover popping out and throttling your enemy from behind. Similar to the Thief series, you’ll then need to hide the body because if it’s found you’ll end up in the middle of a full scale manhunt… not good when you only have 6 bullets in your pistol… 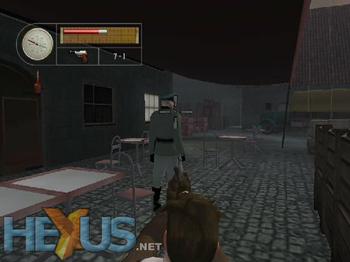 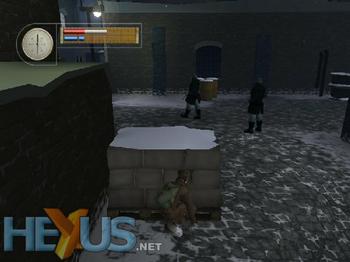 All in all, Pilot Down: Behind Enemy Lines is shaping up to be a good little sneaker. The slower paced gameplay may not appeal to everyone but it’s got a refreshing approach to the stealth/action game and with its dead-easy context sensitive interface it’s a doddle to pick up and play. Check back here soon for a full review. 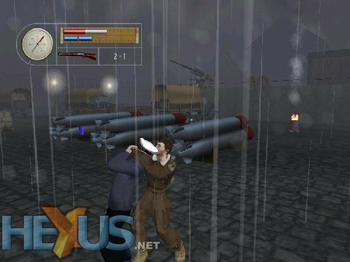 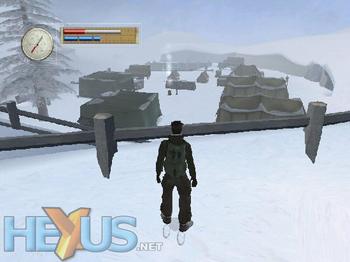