The level design makes for very linear game play. While you can run away if things are going badly for the low level swarms of minions inhabit the map, when you come across the middle level lieutenants you often find yourself locked into to the battle where it is do or die; this is always the case with Boss at the end, at which point you move to a new area and cannot then go back to collect any remaining objects.

The key to unlocking the really good items is "chaining". A chain happens when more than one mission in a row is completed. When you complete a mission you are given the option to keep the special reward object or to gamble getting more and better objects for your heroes as the reward for success. If you fail you lose those rewards. If you do gamble you must start the next mission right away (and cannot edit to added newly collected objects.)

Later in the game you can set up more than one squad in advance so you can select an appropriate one based on the enemy races you are likely to encounter. Also, catalysts (power ups) obtained in the chain are preserved between missions. This results in repeating quite a few missions, so you can gain enough catalysts to take on a particularly hard boss. This greatly increase the amount of game time, and frustrates when you fail. The basic missions consist of six chapters, with four missions on each and the mission maps are repeated three times on the same planet. Despite the repetition, they do look increasingly dark and run down, and have harder enemies. 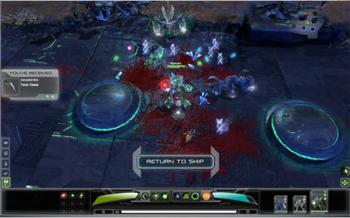 This brings us on to hero management. Playing the game yields experience, however, this does not affect your heroes, it increases your crogenitor level which allows you to buy increases in player caps (using the in game money DNA) and to unlock new heroes from which you can select a few to join your team. While there are 100 to pick from, there are four or so copies of each basic hero, which then only differ by their squad ability. Sadly, all abilities of the heroes are already preselected, you have to select one that has the abilities you like. With DNA and spore in the title I had hoped you could inject and mix your heroes to modify their abilities, as well as mutating their appearance. However, you are limited to bolting on objects (picked up on mission) to a hero base character; these are paid for by "DNA" to restrict the number of changes, which really isn't very genetic. You can only have one of each of the six types of object on a hero. These objects can be attached anywhere on the hero, as well as being sized and rotated. This, combined with free detail objects and colour sprays, allows unique looking one of a kind heroes to be created, but sadly it does not change their use or effectiveness.