The following review was submitted by James Hawtin, one of our regular contributors at HEXUS.gaming. The opinions expressed in this review are his own and not necessarily the views of the HEXUS team.

In Darkspore you are woken in your ship by your computer Helix. You are one of the last crogenitors who has been frozen in stasis until a solution to the Darkspore problem can be found. Crogenitors society was based around the manipulation of DNA (eDNA) of creatures to do their bidding, known as Heroes. However the new eDNA proved to be unstable and mutated into the Darkspore, you have finally been awoken, as Helix has found a way to stabilise eDNA so you can use the few remaining Heroes in stasis on your ship to try to wipe the Darkspore from the Universe.

Darkspore consists of two parts, a strategic layer of squad building conducted on your ship, and mission based encounters on the surface of various planets. The voice-over on the plot is annoying and dark, which is a contrast to the bright cartoon-like action that takes place on the planets surface. Your heroes can be best described as bio-pokemon, even down to the twist in the fact that you take three of them in a squad down to the planets surface, yet choose one to battle with at a time. 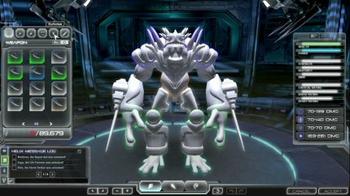 Heroes have five abilities, three active abilities, one passive (always active) and one accessible to the squad. In addition, heroes have one main attack either ranged or a melee, and are members of five races. Enemies are also divided into the same five races, of which only two will normally be present on any particular mission. As heroes take double damage versus enemies of the same race, squad selection and rotation can be the difference between success and failure.

The tactical combat is a third person windowed view on a attractive, cartoon-looking world (which is what you might expect from a Maxis game.) Combined with requiring full zoom out for effective game play, however, it gives a rather disconnected view on the world particularly when in the heat of battle it is possible to lose track of the cursor - so in the end you feel more a watcher of the action than a participant in it. The controls are refreshingly simple; almost everything can controlled with clicking on the screen, however, there are a few keyboard shortcuts.