What is The Saboteur?
From Pandemic Studios, the now disbanded developer whose portfolio includes the likes of Mercenaries 2 and Star Wars Battlefront, The Saboteur is an open world action/adventure where you star as a Saboteur as he fights, climbs, and races through a uniquely stylised version of Nazi-occupied France. As you progress through the game, you move from the dark backdrop of an oppressive black and white policed state, to a bright world where the citizens fight back.

Set in 1940's Paris, you play as Sean Devlin, a street-tough Irish racing mechanic seeking personal redemption. With the help of the French Resistance, British intelligence, an arsenal of weaponry, and your own street smarts and brawn, the aim of the game is to exact revenge on those who have aimed to destroy your life. Motivated by retribution, sabotage is high on your agenda as you derail trains, implode bridges, destroy armoured tanks, and level enemy facilities all in the name of vengeance.

The Paris location features many famous sites including the Eiffel Tower the riverbanks of the Seine, the cathedral of Notre Dame and the prestigious Champs-Élysées. As a saboteur you're able to climb buildings (Assassin's Creed style) and sneak and execute stealth kills to eliminate the Nazi occupation.

The majority of the gameplay revolves around armed and melee combat, but there’s also a healthy does of stealth play where you need to use your head to defeat the Nazis or solve an objective.

The Saboteur also features a range of vehicles which can be hijacked. From high performance race-cars to military vehicles, you can jump into any vehicle that comes your way, which provides an ideal way to escape your pursuers. 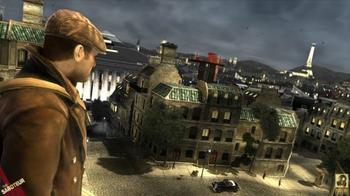