Gameplay Impressions
Visually, the black and white backdrop of 1940’s Paris, which eventually develops into full muti-colour, provides an excellent setting for this enjoyable, yet fairly ordinary, open-world adventure.

With flecks of various shades starting off the visual transformation as you defeat the Nazi stronghold - and then blossoming and spreading from suburb to suburb - the art direction in The Saboteur is certainly something that we haven’t experience before in a video game. And to all intents and purposes it's impressive and works extremely well to create a unique atmosphere. We felt a sense of achievement as colour flooded back into the city and we were motivated to push forward and complete side objectives in order to see what Paris would look like in full bloom; and it's worth the effort.

The art direction cleverly reflects the mood of the citizens of Paris and how they feel as you progress through the storyline. It certainly provides a refreshing alternative to the standard, real-world inspired art direction that we’ve become accustomed to in games normally set during this period.

Graphically, The Saboteur also stands up quite well. Moving from the bustling streets of Paris, which has been designed with painstaking attention to detail, to the rolling countryside of Le Havre region certainly provides enough visual encouragement for you to want to explore, even it doesn’t quite live up to the graphical achievements of some of the greater open-world games of recent times, such as the Grand Theft Auto series. The cracks partiularly show when you get close up to buildings. From a distance everything looks great, but get face-to-face and you'll see that The Sabotuer is rough around the edges; an opinion that we'd also apply to some aspects of the gameplay and indeed the game mechanics.

Aside from the art direction, there's nothing particularly new or innovative about the Sabotuer; it uses a familiar open-world blu-print which sees you visiting NPCs, picking up missions and side-objectives, trekking across regions, and searching for collectibles. However, Pandemic Studios gets quite a few things right and has been wise to watch and learn from the masters of open-world games by implementing a GTA-style HUD that makes traversing the landscape and picking and choosing quests an absolute breeze. 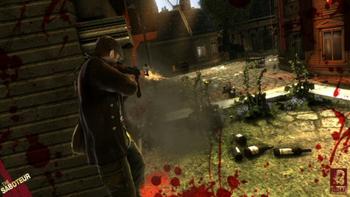 The game mechanics have been competently handled, but there was plenty of room for improvement. The cars handle well, but like they do in EA's Godfather series rather than GTA. Climbing buildings is straightforward with impressive animation, but Sean is certainly no Ezio (from Assassin's Creed.) Clunky hand-to--hand combat mechanics, and a shooting system that is heavily stacked in your favour (it takes a lot of bullets Sean to die) are all signs that Pandemic aimed for a set of half-decent game mechanics rather than pushing for acheiving anything above ordinary. The lack of care also shows in the numerous glitches that we encountered, including re-spawning enemies that emerge out of thin air and Nazis that "do the running man dance" into brick walls.

The authentic wartime atmosphere that has been created in The Sabotuer, with the excellent art direction and 40's soundtrack, is a real highlight of the game, but that authenticty is ruined slightly by the script writers attempt at humour, and some laughable voice acting. Sean Devlin's "top 'o the morning" Irish accent is so over the top that he sounds more like a pirate than a Irish man. And he says ridiculous things that you're more likely to hear in the playground than in war time. "Salute that ya nob jockey," he shouts as he punches a Nazi in the face during a bar brawl.

Unfortunately, this meant that we didn't connect with the character or empathise towards him. Sean is just a drunken lout with his own personal agenda, which doesnt really fit in with the ethics of the real French Resistance at that time. Okay, so The Sabotuer isn't supposed to be realistic. If the "Allo Allo-style" French accents doesn't tell you that then the historical untruths and the Indiana Jones-style over-the-top antics of Sean will.

And it's actually the stupid remarks from Sean or any number of the Nazi's or French in the game, and the totally over-the-top missions that make it quite good fun to play. It may sound like we've been slightly over negative in this review, but we have actually had fun playing The Saboteur. We've enjoyed climbing a building and dropping into a Nazi stronghold on a zip line, planting charges and then jumping into a car and escaping as a fuel depot blows up behind us, or getting involved in a huge bar brawl the night before a big race in the Saarbrucken against the nasty Kurt Dierker, a prominent Nazi figure.

There are some interesting and varied missions and multiple ways to carry them out, which gives you a lot of choices throughout the game. The addictive Perks system, which rewards you with new weapons and various perks, such as cheaper dynamite on the black market, also actively encourages you to be more violent and over-the-top in your mindset. That sums up The Sabotuer - it's mindless fun, just dont expect anything more and you'll have a good time.

We can't remember ever playing a sandbox game set during war time, so to that extent, The Saboteur does feel like a unique experience and on the whole it's one that we've enjoyed, though will probably forget over the next couple of months. The art direction is extremely impressive and the design of Paris and the surrounding areas are worthy of exploration, but it does everything else quite competently without taking any risks. Sure, it's fun for a while, but Pandemic Studio's final bow never quite manages to deliver the spectacular game that it could have been, despite showing flourishes of promise.

Posted by Singh400 - Tue 29 Dec 2009 11:17
Can't believe no one is raving about this game. It's brilliant. It's a mix between Assassin's Creed (for the climbing and stealth part of the game) and Mafia (for the engrossing atomsphere of the game).

I love how the cities turn black/white when you enter a repressed area, and when you do a key mission the people of that city get inspired and colour rolls back into the city and as a result the enemy presence (yay killing nazis) is decreased alot.

Music is great, style is great. Graphics are ok, but the game play is the winner here. Haven't had so much fun in a while. Game is buggy as hell on the PC (doesn't work at all on some ATi cards, beta patch is out), so I would advise you to get it for the consoles if at all possible.

What a swan song for Pandemic. Shame they got shut down, I would have loved to have seen a Saboteur sequel.

Posted by Ferral - Tue 29 Dec 2009 11:25
I've played it a bit now and agree with your sentiments. Assasins Creed 2 has been getting my time lately though as I am a huge fan of the series so far. But Saboteur is a great game with decent elements of different games, its enjoyable. Just a shame Pandemic has been shut down.
Posted by Methanoid - Tue 06 Apr 2010 12:22
Oh damn.. I have just been playing this game, did a search to see if someone was selling a copy and found out no chance of a sequel.