DMR is a powerful new weapon

Single Player Campaign
While the typical aliens vs. humans, Space Marine narrative has never been Halo’s strongest selling point, things are tied up very nicely here with some enjoyable plot twists and a tale that fittingly ends just as the original Halo Combat Evolved begins. The solid voice acting, pulsating musical score and top notch production values give the campaign a cinematic feel that very few developers manage to grasp.

Halo Reach follows Noble Team, a UNSC special operations unit comprising of elite supersoldiers as they fight once again against the alien Covenant forces. Typically consisting of numerous attack and defense missions, the main aim of the game is to rid the planet of these creatures. The campaign features everything that Halo fans have already been treated to over the years, including tense battles, a wide range of familiar UNSC and Covenant weapons, all of the great enemies from the past, plus it places you in the best looking Halo Universe ever created, a world full of powerful imagery and iconic structures.

The main attraction of the game, however, is the pulsating gameplay that hasn't so much changed dramatically, just evolved into a more varied shooter experience. The smooth gameplay mechanics are one of the reasons why Halo Reach is such an enjoyable game to play. The targeting system is spot-on and there's some incredible physics as enemies and vehicles explode impacting the environment and those who happen to get caught in the blast in a natural-looking way. The A.I. is incredible, with an array of enemies sporting different play styles. Halo Reach keeps you on your toes by throwing a mixture of enemies at you at the same time to try and make you tactically think rather than just run and gun. Even your AI team-mates, Noble Team, follow you throughout the game and make a significant contribution to the gameplay, moving up the battlefield impressively and supporting you in battle. You really feel they are helping out and are part of the team. This is an intense and exciting single player campaign that benefits from its range of enemies and how they perform, but one that is also bolstered by some impressive new additions to the series.

Alongside familiar weapons, such as the assault rifle and shotgun, there are some impressive new fire-arms. The DMR(Designated Marksman Rifle,) for example, offers a 3x zoom and supreme accuracy allowing you to take Grunts down with one carefully placed headshot. This is a powerful addition to the arsenal that fills you with confidence on the battlefield due its power. There's also an enhanced version of the Grenade Launcher that has different firing modes and a Plasma Repeater that offers a solid alternative to the overheating Plasma Rifle. The new target locator on the other hand offers an effective solution to long range combat, allowing you to target an area and send half a dozens bombs raining down from above on specific targets. All of the new additions, and there's many more than we haven't talked about in this review, means that there's a lot of variety on the battlefield and the chance to test out many different strategies. 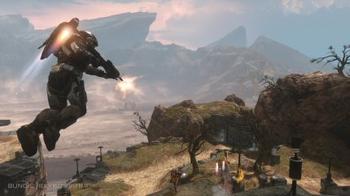