Thanks for the good times Bungie!

Halo Reach marks a defining moment for Bungie signalling the final instalment of the Halo series as it moves on to concentrate on other projects. Judging by interviews with the developer over the past year, to go out on a high is obviously important to the team. Evidently, it wants to bring together everything that has made the series great thus far and push the Xbox 360 hardware to its limits and deliver a final curtain call that's worthy of a rousing standing ovation. During the development phase, Bungie has always said it has “focused on making sure that players feel a sense of accomplishment and success,” during this final bow.

Having been involved with Xbox since the birth of Xbox Live, when Ghost Recon would often keep me and a relatively small amount of others up throughout the night, the Halo series brought multiplayer gaming on consoles to a whole new level. The framework was there but was in its infancy with Halo Combat Evolved. With 16 player system link games it meant that LAN parties and competitions were really the only place to get your multiplayer kicks. Halo 2 changed all that. It was the most robust, balanced and comprehensive online multiplayer set-up that a console had ever seen with a range of exciting playlists that were geared to different styles of play.

Halo 3 built on that solid foundation with an even deeper matchmaking and TrueSkill ranking system, while introducing the brilliant Forge mode allowing players to customise their own maps, a move that further enhanced replay value. No other console multiplayer game has ever come close to creating such a deep multiplayer system that boasted such a massive and passionate online community.

Halo ODST was always going to be a stop gap before the next main Halo game. Despite being marketed as a full, brand new Halo experience it felt much like the add-on that it was originally meant to be. Nevertheless it introduced the superb co-op firefight mode, further proof that Bungie was still looking to deepen the Halo experience. And so, here we are today and Halo Reach, the last game in the Halo series that is likely to ever take the same format that fans have embraced so lovingly over the years.

It's a sad time for many Halo fans, but it's also a time to celebrate because Bungie has done a incredible job. It’s taken everything that it's learned from past games, tweaked things here and there, and added some significant features to make Halo Reach a fitting tribute to one of the best shooters on the planet. There's nowhere that Bungie could have gone from here anyway. This is the best Halo game you'll ever play. 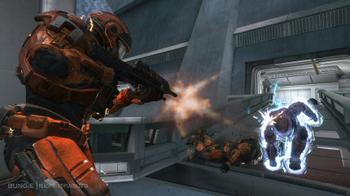