From the team behind Gears Of War...

Version Reviewed - PS3
People Can Fly and Epic Games' new first person shooter Bulletstorm contains more blood-soaked violence than your average shooter. It also features the occasional “I shagged your mum” joke and the kind of sexual innuendo that you probably wouldn't have heard since your school days, where insults such as “cocksucker” and “assmaggot” may well have been the norm among you and your friends. So, it’s no real surprise that it's sparked up plenty of debate recently by those who take the line that aggressive videogames have a close connection with real world crime. Controversy breeds interest, of course, so I doubt Epic Games, or publisher Electonic Arts, are going to be too bothered by those who don’t seem to understand the Bulletstorm’s unique blend of over-the-top-violence and crude language. I do...and I love it!

Insults and innuendo may be banded around liberally in Bulletstorm, but rather than make you cringe with embarassment these crass remarks actually seem quite appropriate to the overall theme of the game, which is about as macho as videogames get. This is the first time in my life where I’ve enjoyed a “Sausage Fest,” been involved in a “Gang Bang” and “Boned” lots of men...and yes, I've also made a “Rear Entry.” Okay, so some of the names of the many ways that you can kill your opponents are a little childish, but they actually make a lot of sense when you hear what you have to do to unlock them. 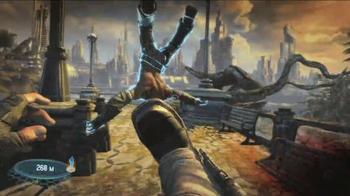 “Sausage Fest,” for example, tasks you with killing an enemy using a hot dog cart explosion - of course - while “Rear Entry” requires you to kill an enemy by shooting him in the ass. It sounds like there was a great meeting of male minds when names were chosen for each of the many moves in the game, but it's also clear that a lot of creativity has gone into their design. The variety of ways you can kill an enemy is outstanding, and working your way down the skill shot list trying to achieve them all is one of the most addictive things about Bulletstorm’s frenetic gameplay. With over 100 different skill shots to achieve, and points awarded for based on your combos and kill types, it pays to experiment and it’s deeply satisfying pulling off some of the creative kills. Electrocuting enemies, feeding them to the fish, or scouring the locations to pull-off an environmental kill - perhaps by collapsing a ceiling on a bunch of foe - are just a few of the many ways you can get creative with your kills.