Incite mayhem in the most creative way possible.

There is a storyline behind the madness, but it's one of the weakest aspects of Bulletstorm. Playing as space pirate, Grayson Hunt, it tells the story of a futuristic confederation protected by an elite band of mercenaries: Dead Echo. When Dead Echo Grayson Hunt and his colleague Ishi Sato learn they've been working for the wrong side, they're betrayed by their commander and exiled to the far reaches of the galaxy. They have two objectives: get off the planet alive, and exact revenge on the man who sent them there.

It actually sounds like a half-decent premise. And it is for a short period of time, as you enjoy some of the well-produced cut-scenes and witty dialogue. In truth though, while the sci-fi backdrop and the planet of Stygia makes for some impressive scenery, in reality you’re not going to play Bulletstorm for the storyline. I lost the plot after the first couple of cut-scenes, around about the same time I got to boot one of grubby-looking warriors off a cliff, blow another one’s head clean off and then use an energy leash to latch onto a grunt and send him hurtling into a set of spikes that were embedded handily on a rock nearby. Evidentally, the action overshadows the storyline completely, so the only thing that you need to really know about Bulletstorm is that you’ll be attacked by hordes of mutants and flesh eating gangs. The good news is that you have an arsenal of crazy moves and stupidly large and powerful weapons at your disposal, not to mention the stunning skill shot system to help you through. 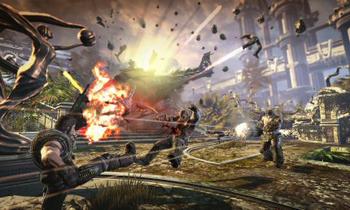 Bulletstorm features a variation on some of the standard FPS weapons, such as the assault rifle and shotgun which are fun to use. However, it's when you pick up the unique weapons that the game really excels, with the likes of the energy leash, which you can use to grab enemies from a distance and drag them across the environment, or the flail gun which fires two grenades that are attached together by a chain. Weapon handling is smooth and mixing and matching moves and fire-arms becomes quite an intuitive reaction , so no matter what killing tool you use to blow enemy heads clean off combat rarely gets boring. Whenever you kill an enemy, the score and the move that you used to annihilate him pops up on screen, and it’s very gratifying seeing your score tally up and then upgrading your weapons and unlocking skill shots as you progress.