Version Reviewed - PlayStation 3
Crysis’2’s longevity lies with its multiplayer component, but – after taking all the pre-release hype on board – I was expecting an equally impressive single player campaign too. Sadly, that hasn’t proved to be the case. Though, Crysis 2’s campaign shows flashes of brilliance and ingenuity during its eight hour or so campaign – and is certainly one of finest looking games you’ll ever play – it largely fails to deliver enough thrills and spills to make it an experience that I'll remember come the end of the year, when the awards for best shooter are being dished out. The lack of intensity and real tactical challenge in many of the battles is partly to blame, yet ironically Crytek has created some fairly large and stunningly designed multi-tiered environments, and included features that are designed specifically to give you that tactical freedom.

Like most shooters, Crysis 2 generally involves traditional ‘A’ to ‘B’ objectives where you're tasked with the likes of blowing up an ammo stockpile with some C4, or gathering specimen samples from an alien pod. The impressively large levels, set within a finely detailed adaptation of New York City, give you the freedom to adopt a variety of tactics and make use of the game’s impressive array of weapons. Although you're usually tasked with having to reach an end point in each mission - battling your way though soldiers and aliens to get there - levels are designed in a way to encourage you to make use of the powers of the nanosuit - the major feature that makes Crysis 2 stand out from other shooters. 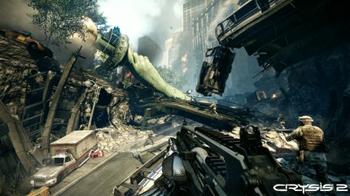 The nanosuit's main tactical strength is its visor. You can open up the visor at least once per level and survey a range of tactical opportunities. Scan the location and you’ll see positions marked with instructions, such as ‘Flank,’ ‘Stealth Kill,’ ‘Explore’ and ‘Snipe.’ You can then tag them, and head to these positions to take advantage of a specific tactic. ‘Flank,’ for example, might send you into a sewer system to bypass guards on the main road, whereas ‘Stealth’ might offer you a way to avoid a battle completely by turning yourself invisible. Needless to say, this feature does give you a lot of tactical freedom and lets you tackle the battlefield in numerous ways, should you want to experiment.