The nanosuit also has a range of other powers that you can utilise for short periods of time. The armour mode, for example, gives you extra protection; the stealth mode makes you invisible and nanovision (thermal vision) can be used for spotting enemies in the dark. The nanosuit offers some impressive core powers, but they end up feeling a bit like a cheat system that tips the balance of the battles so much in your favour that some of the challenge is removed. I found, for example, that I could often tag the option for the exit or end objective, turn myself invisible and run like hell with the sprint ability, making it to the next cut-scene or section where I’d be safe from the dozen or so guards I'd left behind. With the option always available to turn invisible, and run like Speedy Gonzales, it's quite tempting to do so at every opportunity - especially when you’re under any pressure, or come against the heavily armoured enemies.

And you do come under-pressure quite often, as enemies pin-point your location and make their way toward you, or stick rigidly to cover encouraging you to make the first move. You’ll find enemies that you left way behind sneak up behind, or occasions where a guard will hear your footsteps and alert his troops. That’s not to say A.I. is particularly clever though. Poor enemy path-finding, guards who just stand there and ignore you or who glitch into cover become quite frequent events. Considering Crysis 2 was supposed to boast some of the best A.I. we've ever seen, I've seen little evidence of clever enemy tactics. 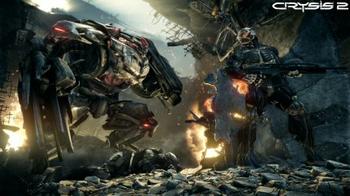 Generally, if you tag the stealth option every time you'll breeze through the main battlefields of Crysis 2, sometimes without even firing a shot; and with it always available, it does become so convenient you'll just want to use it to get to the next section, largely because missions are rarely that engrossing. Of course, you don't have to use stealth; you can play Crysis 2 like a normal shooter.Other tactical options are much more interesting, and trying to flank, infiltrate or head to a sniper point is where the main thrills lie. Weapons generally handle impressively, though I have experienced some problems with hit detection - particularly with sniping. The addition of modules adds a further layer to the combat, allowing you to improve on your various attributes, such as being able to leap higher, or inflict more damage. As the game progresses you do feel yourself becoming more and more powerful and the action does get much more intense than the first half of the game, which rarely gets going. There’s also some fun to be had out of ledge grabbbing and using the height of the environments to your advantage and being able to power kick objects into enemies, or kill them by sliding.