Version Reviewed - PS3
You always know where you stand with Valve — well, most of the time. Granted, Portal’s developer lied about rewarding us with cake for completing its puzzle-platformer, but with the likes of Left 4 Dead and the genre-defining Half-Life series already under its belt, you can guarantee that the studio will always try to inject something a little extra special into every project it undertakes. Portal 2 is no different. Despite the initial familiarity of some of the test chamber puzzles, the sequel to the 2007 bite-sized hit offers a master class in level design and script-writing. And, the further you venture into the Aperture Science facility, the more crazy and ingenious the level design gets as you face a wide range of immersive physics and momentum-based puzzles that never fail to challenge and entertain.

Portal was way ahead of its genre in 2007 when it introduced the portal gun. Blasting portals into walls, floors and ceilings - and scratching our heads rigorously trying to work out ways to teleport across the environment to escape from the test chambers - was both challenging and totally absorbing. These portals basically created a visual and physical connection between two different locations in a three-dimensional space and added a completely unique game mechanic. You could then move objects, such as blocks, through the portals and use momentum to generate speed and height. Though the concept of environment-based puzzles — where you simply have to try to work your way out of an enclosed location — is fairly uncomplicated, the execution was anything but. 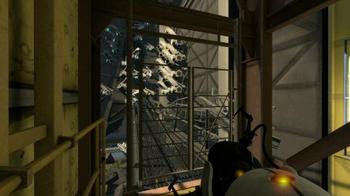 Though Valve’s portal-blasting formula hasn’t changed drastically in Portal 2, it’s still as compelling as ever and even more challenging. Valve has made its sequel into a fully-fledged game this time around (the original lasted only a few hours), complete with a ten chapter single player campaign that should take most people about ten hours or more to complete. This is in addition to a captivating co-op mode that hosts tougher puzzles designed to be solved with a friend. There are also a number of new mechanics to compliment the laying of portals too, as well as an increased variety of ways in which you can escape a chamber. With new game mechanics and more elaborately designed chambers, Portal 2 can occasionally push your brain into overdrive and cause it to over-heat. When you do manage to escape a test chamber, however, you get a real feeling of achievement and satisfaction. It's the buzz you get from completing these tough challenges that fuels your passion for more. As such, once you get into the Portal mind-set, it’s hard to leave.