The way that you smoothly move around the test chambers from the first-person perspective is identical to the first game. Once again, Valve uses its Source engine to power Portal 2, so graphically there's also little difference between the two games. Nonetheless, there’s a real sense of scale to some of the locations as you get to visit new parts of the facility. Furthermore, Valve uses impressive light and shadow effects to give the environments depth and life. On the whole, the Aperture Science facility, though in a state of disrepair — with nature now creeping through its brick-work — is a more pleasant place to explore with splashes of color brightening up the grey/blue chambers.

Each chapter in Portal 2 is usually made up of test chambers that get increasingly difficult to solve. You can pick up and drop objects, use your portal gun to teleport around the chamber, and use a variety of items to help you escape from a room — perhaps manipulating a block so that it redirects the path of a laser, which in turn could be used to destroy a turret, or activate a door. Just when you think you've seen it all, Portal 2 throws something new at you, which adds a new layer to the challenge. You can manipulate air currents to blast away at turrets, or use repulsion gel that transforms surfaces into a trampoline. There's excursion funnels allowing you to pull objects through portals and a new weighted pivot cube that allows you to change the direction of lasers. There's a lot to think about, and a lot of fun to be had out of trying to work your way out of a location. 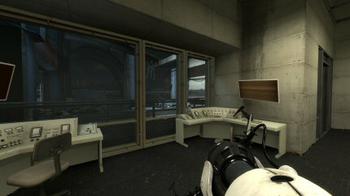 Nonetheless, Portal 2 isn't going to appeal to everyone. Though it does well to introduce you to new tools and tries to break you in gently by giving you some fairly simple puzzles to solve, it can get extremely challenging later on, which may lead to frustration for those who don't have the patience. The game also loses a little bit of momentum about halfway through, when you enter the depths of the Aperture Science Facility; though it soon picks back up. During this section, escaping becomes more about guessing how on earth you can make your way through this large environment, rather than logically having to puzzle your way out. I was trapped for over 45 minutes in one section, before realising all I had to do was find a tiny gap in a metal fence that allowed to me to shoot a portal into a wall far away in the distance. The new environments look great, but it can be a little frustrating trying to escape, and it’s fairly unclear about what you need to do to progress.