Another earlier report from Nielsen looked at mobile Internet usage among the yoof.

The study had a look at what people aged 15-24 used their phones for in the category of ‘advanced data usage.

As you can see, the UK is miles ahead of the rest of Europe when it comes to youthful mobile Internet usage.

Nielsen doesn't really draw any conclusions from these figures, but to us it's clear that the UK is currently by far the biggest mobile Internet market in Europe.

This is probably helped by the fact that many of the best Apps will be written in English first.

These figures also imply the UK is likely to produce a disproportionate number of app developers. Maybe we've got half a chance of being less dependent on the financial services sector in future. 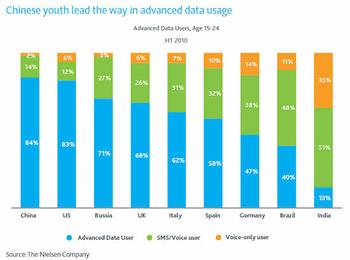 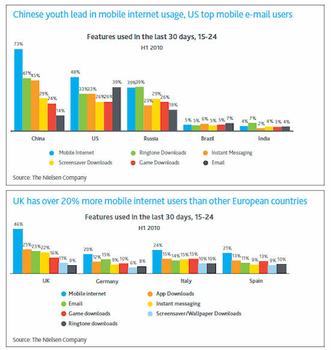 Posted by TooNice - Mon 17 Jan 2011 18:17
Interesting that India and China are such polar opposite of each other. I wonder how Japan would fare on the graphs: while not every mobile has a web browser, email has more or less replaced SMS (which does work, as evidenced by the fact that I can contact friends that way - but never used between themselves).
Posted by j.o.s.h.1408 - Mon 17 Jan 2011 19:18
too bad the job markets dead for mobile developers atm
Posted by TheAnimus - Mon 17 Jan 2011 19:53
Really? Not what I've heard from some acquaintances who are in that line of work.