You are here:
Windows Phone Features

Since its inception in October 2010, I've been impressed with Microsoft's revamped Windows Phone platform. It's refreshingly different, it feels fast and fluid throughout, and with the likes of the Lumia 920 and HTC 8X, the software is backed up by equally-impressive hardware.

There's a lot of promise, but Windows Phone hasn't managed to take the market by storm, at least not yet. Though, there are small signs of progress. Recent market analysis suggests that the number of U.S. smartphones running Microsoft's operating system rose from 1.3% in Q2 2012 to 2% in Q3. In another report, Microsoft's UK market share is said to have risen from 1.7% in November 2011 to 5.1% in November 2012. 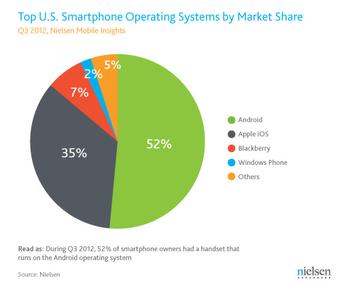 Whichever way you cut it, the numbers represent a small slice of the pie, and with Microsoft finding it difficult to attract both consumers and developers, this week's question is inevitable: does Windows Phone stand a chance?

We'd love to hear your thoughts, so have your say in the comments section below.

20 WhatsApp shuts down on Windows 10 Mobile on 31st Dec

And Microsoft delivers the last cumulative update to its mobile platform on 10th Dec.

"They will not look like phones that are there today," says Satya Nadella in an interview.

Posted by 3dcandy - Fri 18 Jan 2013 16:35
Not sure - I reserve judgement as the first person I actually know has bought one this week. Gimme a play and I'll have an opinion
Posted by Obscurity - Fri 18 Jan 2013 16:42
I thought their share was decreasing? I quite like the APPEARANCE of the interface, its a nice change from the android/iOS style, but overall, is it really a functioning OS? Does it have the developer following? Not quite…
Posted by kopite - Fri 18 Jan 2013 16:43
I had a mess around with a windows 7 phone when they first came out and thought it was pretty good but not good enough to make me swap from android.

I dont think its going to die off completely but I dont think it will really challenge android /ios
Posted by Smudger - Fri 18 Jan 2013 16:45
I don't think it'll ever be the top seller out of the 3 majors, but I see a lot of people with WP at the moment.
Posted by TheAnimus - Fri 18 Jan 2013 16:51
I think its going to be the Apple of the desktop world. An insignficant also ran, that a very small minority of people of a certain type make a lot of noise about.