With the market yet to calm-down over the release of Samsung's GALAXY S III smartphone, it has been revealed, only three days after the unveiling of Apple's iPhone 5, that Samsung already has plans to introduce the world to the GALAXY S IV, at next year's Mobile World Congress, in February.

The Korea Times claims that this information has been confirmed by both Samsung execs and suppliers. Actual stock of the phone will likely be hitting shelves just prior to March. So why the sudden forward-push to the schedule?

For one, Samsung had managed to sell 20 million GALAXY S III's in just three months, with predictions of 30 million sales before the end of the year - showing execs that there's big bucks to be made, comparable to that of its component sales division and, that the firm has what it takes, with a now well-established consumer base.

Returning to component sales, it was recently confirmed that Apple has been shifting orders of components away from Samsung, slowly but surely, reducing the firm's motivation to protect its business with Apple, instead inspiring a more competitive approach, which has been further reinforced by the recent legal damage dealt by Apple.

4G is another motivator. Come March, all UK networks should be offering 4G services and with support for the standard continuing to crop-up around Europe, Samsung needs a smartphone clearly and strongly branded with world-wide 4G LTE support. Further motivation is offered-up by the revelation that Apple's iPhone 5 will only support Everything Everywhere and perhaps Three's 4G networks in the UK, leaving an enticing gap in the market. 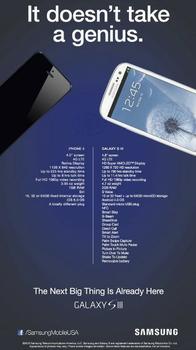 Of course, the iPhone 5 is a motivator as well. Met by mixed reactions, the device has stuck with the very much, love it or hate it, Marmite-like design of the iPhone 4, having received the usual thinning treatment, yet has forgone inclusion of features like NFC and has a rather odd, sub-720p screen resolution. It's difficult to say right now that, despite being the latest device on the market, the iPhone 5 is automatically superior on paper to the competition.

For Samsung, right now Apple is exposed and, it's time to hit hard. If Apple sticks with its yearly release schedule, then Samsung will be gaining some serious ground over the firm that has typically led the market. Likewise, if Apple decides to pull-off an iPhone 4s-style early refresh, Samsung will have adjusted accordingly.

Things are really starting to heat up!

Android apps work in the Windows UI just like other apps, with alerts, clipboard, Snap Layouts.

Samsung already has plans to introduce the world to the GALAXY S IV, at next year's Mobile World Congress, in February

Anyone want to take a bet that this'll just be an iPhone4->4S style “refresh”. ;)

Don't think I'll be in the market for it - preferring to stick with my S3 - and wait until there's a lot more 4G competition, and more especially, coverage.

It's difficult to say right now that, despite being the latest device on the market, the iPhone 5 is automatically superior on paper to the competition.

I agree with the journo's who are saying that Apple have been lazy - and being lazy in the current, high-competitive market means you're falling backwards. I've seen a good few comments from folks saying that they only “downgraded” to an S3 while waiting for the ‘5, but are now going to stick with the S3 because it’s a “better” device, (quotes around that ‘better’ because they obviously mean ‘better for them personally’).

And if they think this year's been hard, wait until next year if/when Nokia get into their stride … :o
Posted by kingpotnoodle - Mon 17 Sep 2012 11:06
I'm rather enjoying seeing the smug iPhone marketing getting a taste of it's own medicine, the 5 isn't the market leading piece of magic apple want you to think and it's looking like an increasingly hard task to persuade people it is. IMHO in 1 year that iPhone 5 will look pretty outdated whilst the other new phones on the horizon will be ageing better.
Posted by Hicks12 - Mon 17 Sep 2012 13:40
I actually like the s3, havent got one as im still using my optimus 2x until my contract ends in may so it may mean that this new galaxy will be released and had time to relax the pricing and somehow get it for <£20 (my max for phone contracts haha). Shame 4G wont be arriving in Plymouth for many many many many many years :(.
Posted by HalloweenJack - Mon 17 Sep 2012 15:52
o2 alrleady announced my home town will be 4g next year so cant wait , just as my current phone comes off contract!
Posted by MadduckUK - Mon 17 Sep 2012 15:56

crossy
wait until next year if/when Nokia get into their stride … :o

Only place they will be striding is the Job Centre.