In our last AMD Ryzen story, about the confirmation that all the CPUs will be sold with unlocked multipliers, we included a statement from AMD's Robert Hallock regarding launch date. Mr Hallock said that "The very last day of Q1 is not our trajectory," so we might see the launch as early as February.

The launch date could well coincide with GDC 2017 which runs from 27th Feb to 3rd March. A statement in the GDC 2017 Session Scheduler indicated that a tech talk is a follow-up from the Ryzen CPU launch. VideoCardz spotted the slip up in the session info about 'Optimising from AMD Ryzen CPU', which has since been edited. 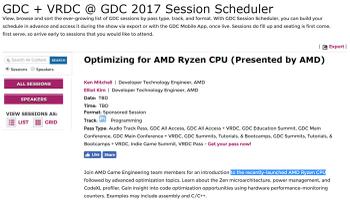 Before the session information, likely sent to GDC administrators by AMD engineers, was edited it included the telltale phrase:

Now if you visit the GDC 2017 Session Scheduler the "recently launched" part in the above sentence is gone. 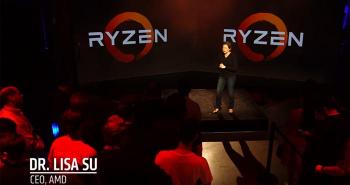 In other Ryzen news today, CanardPC (via Guru3D) says that AMD is launching at least one quad-core Ryzen CPU with 65W TDP, alongside its headlining 8C/16T parts. Interestingly the French magazine says that there will be both HT enabled and disabled (4C/8T, and 4C/4T) CPUs to match what Intel is offering.

flearider
just get it done already ..

my thoughts exactly
Posted by Biscuit - Fri 13 Jan 2017 05:54
Shame there isnt any specific mention of 6 core parts, as that could be a real sweet spot.

Saying that, pricing could make it redundant.
Copyright © 1998 - 2022, HEXUS.net. All rights reserved. HEXUS® is a registered trademark of HEXUS.