A couple of weeks back we saw a 'leaked Powerpoint presentation' that indicated Intel was readying its first ever Core i9-Series processors. These processors would sport as many as 12 physical cores, and up to 24 threads via Hyperthreading. A table showed that the Core i9-7920X was the top-end Skylake-X processor and it was asserted by the source that we would see many of this processor range launched in June.

Fast forward to last Thursday and a SiSoft Sandra benchmark database entry seemed to confirm one of the lower tier Skylake-X processors had been undergoing some testing. The Core i9-7900X appeared to have been 'confirmed', packing 10C/20T but with a TDP of 175W. 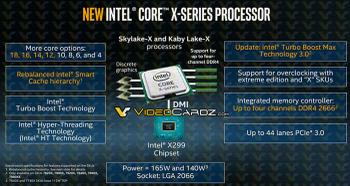 Today, in an exclusive from the leak specialists over at VideoCardz, new slides and info "from multiple sources" assert that Intel's Core X-Series chips will include SKUs with up to 18 cores. In a genuine looking Intel slide you can see above, the first callout box clearly boasts that the upcoming enthusiast processors will offer "More core options: 18, 16, 14, 12, 10, 8, 6, and 4."

Other highlighted features of the X-Series include a so-called Rebalanced Intel Smart Cache hierarchy. This will tweak the L1, L2, and L3 cache structure. Intel also trumpets and updated Turbo Boost Max Technology 3.0, and an integrated memory controller for up to four channels of DDR4 2666.

Using new data VideoCardz has put together the table above which adds the 18C/36T Core i9-7980XE at the top of the pile. The site also sourced some gaudy (RGB LED illuminated?) boxes for the upcoming X-Series. Please remember to take these rumours with a pinch of salt.

Intel's Computex keynote is scheduled for tomorrow at 2pm Taiwan time (7am here in the UK).

Posted by QuorTek - Mon 29 May 2017 16:42
As I read it, then it is like they are digging into their work station CPUs and rebranding them..sorry if I am paranoid or anything… though if AMD keeps pushing out good stuff now and in the future + good prices.. then will be AMD next time building a system for sure.

Not a fanboy of either brand but if offer high quality for a more reasonable amount of money then count me in, and if the difference is like 5% or less give or take performance wise either side then wont notice the difference if buying the top products from either company.
Posted by 3dcandy - Mon 29 May 2017 16:43
And you'll need a mortgage to buy one as well
;)
Posted by LSG501 - Mon 29 May 2017 16:59
So basically intel are releasing their ‘xeon cpu’s' onto the desktop as i9 then rather than being called xeon like they are now.

Now based on current ryzen benchmarks, where ryzen has better multithreading in the apps I use, plus the current cheaper pricing from AMD I see no reason why I would pick an i9 over a thread ripper assuming AMD keeps the prices cheaper….the motherboards will likely be cheaper on AMD side too. The Intel cpu might give me better fps in games but lets be honest if you're going after 8+ cores the odds are you're not after the cpu to play games, it's for heavy cpu workloads like 3D rendering and video editing etc.
Posted by Iota - Mon 29 May 2017 18:51

LSG501
The Intel cpu might give me better fps in games but lets be honest if you're going after 8+ cores the odds are you're not after the cpu to play games, it's for heavy cpu workloads like 3D rendering and video editing etc.

Even if it was for gaming, the difference in FPS is so slight I'd be more inclined to go with AMD at this stage, purely for the pricing / core count available.
Posted by Tabbykatze - Mon 29 May 2017 21:51
Well this all seems rather convenient, AMD announces and releases Ryzen 8/16 which do quite well, AMD leaks a little of an HEDT range, Intel bring out their cut down/across Zeons as the i9 series up to 12/24 but then AMD states they will have up to 16/32 as their flagship then magically Intel has an HEDT processor with 18/36.

AMD need to keep this up and see how long the stored up ammo that Intel has stagnating is used up and we see the real battle starting :P