The International Conference for High Performance Computing, Networking, Storage, and Analysis, SC18, kicked off on Sunday. If you remember, a week previously, Intel teased quite a bit of information about its upcoming next gen Xeon scalable processors, or Cascade Lake processors for short, ahead of this event. On Sunday Intel augmented the synthetic benchmark data that it had shared previously, with numbers from several real world HPC/AI applications. 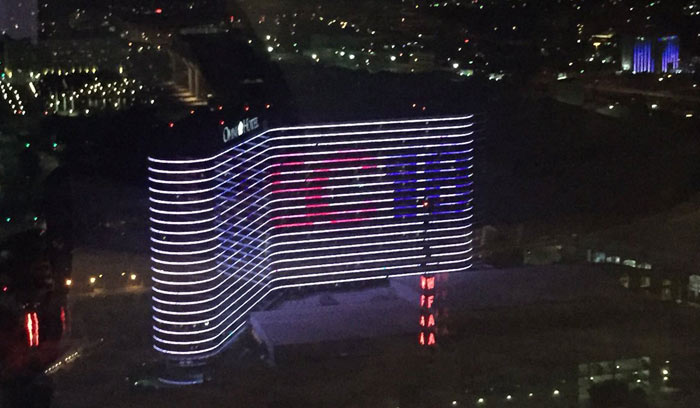 The Cascade Lake chip that Intel is putting under the spotlight is a 48 core multi-chip package (2x 24C). Intel UPI fuses the creation together and there is an optimised cache, deep learning boost via VNNI, and security mitigations built-in to these chips. To recap the following synthetic benchmarks were shared to demonstrate 'performance leadership', last week:

On Sunday Intel revealed more about the performance of Cascade Lake by sharing performance numbers from several real world HPC/AI applications. You can find the main slide from Intel's new reveal below. Download the PDF from Intel to check through two further pages of small print divulging testing notes and configuration details 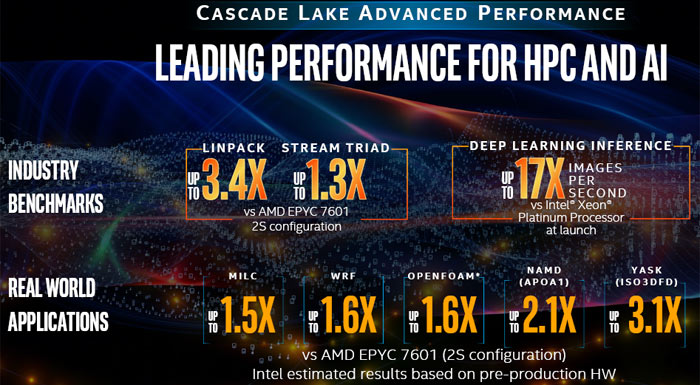 In its accompanying blog post, Intel highlights the large increase in deep learning performance vs its own Xeon Platinum processors (up to 17X). Then, in five real world application tests, it compares the 48C Cascade Lake in 2S configuration against an AMD Epyc 7601 based 2S system. As both systems run with two sockets populated - the Intel machine has 96 cores in total at its disposal, and the AMD one offers 64 physical cores. In the real world tests slide you can see Intel’s system comes out ahead by between 1.5x and 3.1x.

Intel’s Cascade Lake processors will become available during H1 2019. Meanwhile, AMD’s 7nm ‘Zen 2’ based Epyc processors with up to 64C / 128T are in lab testing now, will be sampling soon, and will launch in 2019. Furthermore, there are rumours that the AMD ‘Zen 2’ IPC is as much as 29 per cent higher than for ‘Zen’.

Posted by DanceswithUnix - Mon 12 Nov 2018 10:19
I really would have kept quiet about the Stream Triad test. 50% more memory channels than Epyc, 30% more performance is a dubious win on something that scales really really really well against memory bandwidth.

Edit: Do Intel say whether they had threading turned off on the AMD platform like last time?
Posted by Corky34 - Mon 12 Nov 2018 10:19
I wonder if Intel are aware what the acronym of Cascade Lake Advanced Performance is, do they have it. ;)
Posted by afiretruck - Mon 12 Nov 2018 10:26
Is Hyper Threading enabled on these new glued-together CPUs?
Posted by GinoLatino - Mon 12 Nov 2018 10:35
Comparing with last year AMD product when the new one will probably come out around the same time if not sooner.
It is also fun that they compare the “deep learning inference” with their own old product instead of Epyc 7601 like the other comparison…
Posted by lumireleon - Mon 12 Nov 2018 11:29
Should Nvidia be scared too?