After a multitude of leaks and spills, AMD made the Ryzen 3000XT series official back on 16th June. To get up to speed with that news it is worth a quick look back on the analysis of the new Ryzen 9 3900XT, Ryzen 7 3800XT, Ryzen 5 3600XT, by the HEXUS editor. In summary, the "XT models serve to increase the peak boost speed compared to their regular X counterparts," observed the ed; with the Ryzen 9 3900XT and Ryzen 5 3600XT gaining 100Mhz boost, and the Ryzen 7 3800XT benefiting from a 200MHz boost vs its X-suffixed relative.

The changes seem pretty underwhelming but happily any gains will be provided at the same SRP. Furthermore, it is expected that there will be some underlying tweaks present in the XT designs to provide more worthwhile benefits. HEXUS, nor the rest of the NDA-respecting tech press, isn't allowed to test and talk about real-world performance of the Ryzen 3000XT series CPUs until the hard launch date of Tuesday, 7th July.

While folk wait patiently for some third party performance numbers for the AMD Ryzen 3000XT series, Twitter-based benchmarks database miner Tum Apisak has come up with a Geekbench result for a purported 12C/24T AMD Ryzen 9 3900XT.

Geekbench isn't something that features in HEXUS CPU reviews but some may appreciate checking out the score and then comparing it against existing AMD and Intel processors. In the unearthed test we see that the supposed AMD Ryzen 9 3900XT, strapped onto an Aorus X570 Master motherboard with 16GB of 3200MHz DDR4 twin channel RAM scored 1324 in the single core tests, and 10945 in the multi-core tests. The reported base/boost clocks of the CPU were 3.80/4.57GHz. 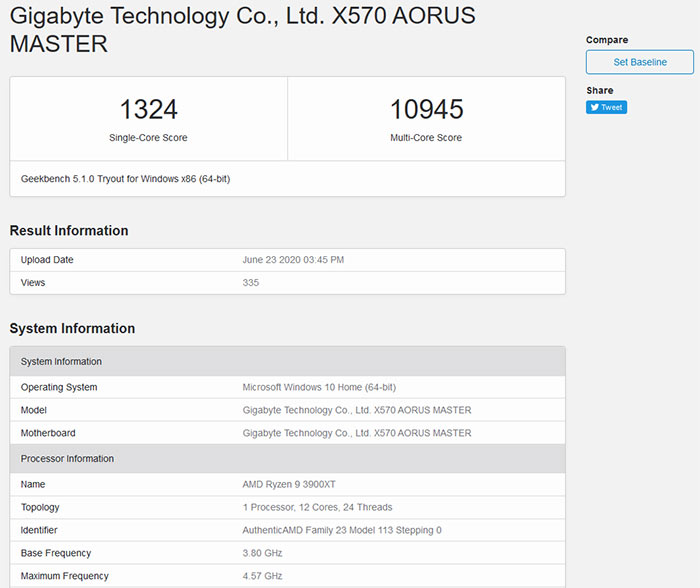 The tests results here show that the AMD Ryzen 9 3900XT is roughly 5 per cent faster in Geekbench 5.1 tests than the 'regular' AMD Ryzen 9 3900X. It is possible that this could be enough to slim the 'gaming supremacy' claims, that Intel often repeats, enough to make the differences negligible. However, for gamers, the perf bumps in the more affordable AMD Ryzen 7 3800XT and Ryzen 5 3600XT may be more relevant.

Update: Apisak has added Geekbench test scores for the whole of the AMD Ryzen 300XT 'Matisse Refresh' line, and they look even more impressive. You can see his summary of tests in the chart below. 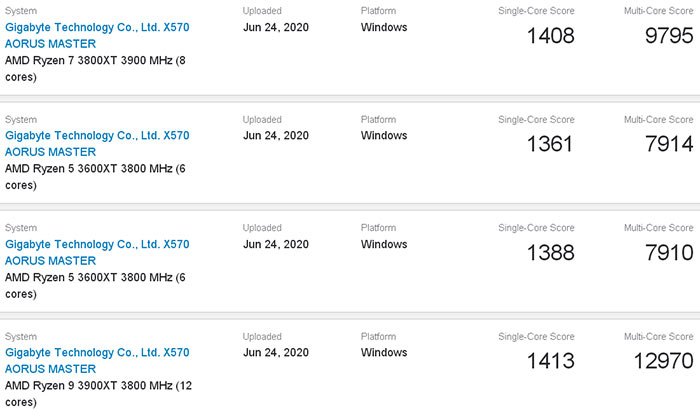 You can compare the above scores with a multitude of Intel 10th gen Comet Lake CPUs in the Geekbench results browser here.